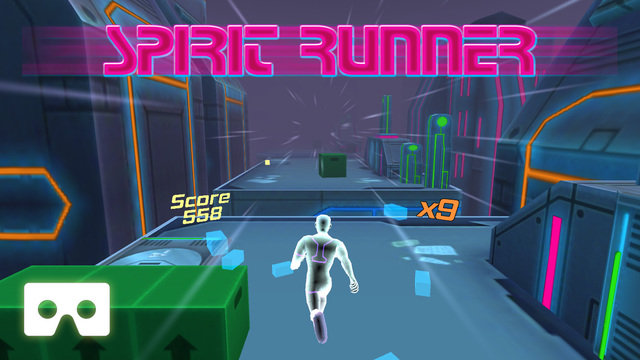 The endless runner genre is one that has been explored by a handful of developers in virtual reality (VR) over the past few years. The most famous example of this is a VR port of mobile hit, Temple Run, onto the Gear VR mobile head-mounted display (HMD) with Temple Run VR. This week sees the launch of a native VR endless runner, however, with Spirit Runner. This new title from UK-based indie developer Rancon is now available to download on both iOS and Android and works with the Google Cardboard DIY HMD.

Bathed in a neon art style, Spirit Runner picks up from where Rancon left off with its previous title, Spirit Fighter. Players will control a character that’s been warped into the world by an unknown force and sprints across rooftops, jumping over gaps and collecting power-ups. The longer players survive the faster the character gets. The project also promotes Vanishing PoYnt, an indie band that’s worked with the developer, featuring its EP I Am Ashes.

“We’re so excited to be working with two of our favourite mediums: music and gaming,” Jan Heuff, MD at Rancon, said of the news. “Even more so to be one of the first South West, if not UK, independent games studios to publish a Virtual Reality game.” He goes on to say “Vanishing PoYnt are a great indie band and have a fantastic approach to promoting their music through games.”

The experience is free to download and play. VRFocus will continue to follow any and all releases for Google Cardboard, reporting back with the latest updates on them.