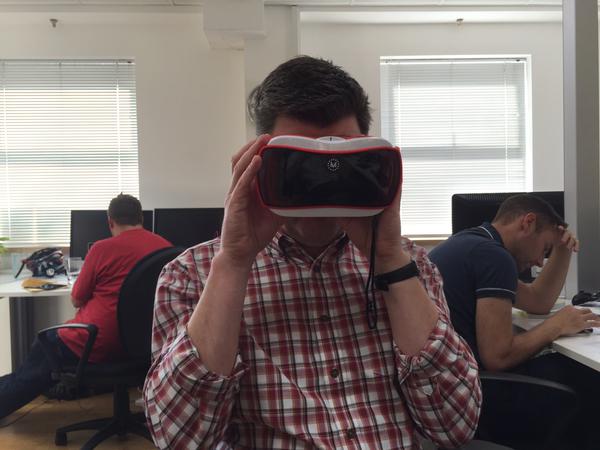 UK-based indie developer Tammeka Games is currently busy preparing the full version of its long-anticipated virtual reality (VR) sci-fi racing experience, Radial-G. The title has been in the Early Access stages since late 2014 and has been working its way towards a final version with support for the Oculus Rift head-mounted display (HMD) and more. This isn’t all that the developer is working on, however, as it has recently teased that it is developing another project for the Google Cardboard line of mobile HMDs, which may be releasing soon.

The developer’s Sam Watts recently teased as much over on his Twitter account. Watts posted a picture – seen below – of Mattel’s new View-Master, a plastic mobile HMD made in partnership with Google that recently released in the USA. Watts has already revealed that he imported the kit, but accompanied this image with the message: “Final testing of the next project release,” complete with tags for VR and, tellingly, Cardboard VR. The developer hasn’t offered any hints as to what this project might be but the fact that it’s in ‘final testing’ suggests it may release soon.

This won’t actually be Tammeka Games’ first mobile VR title. Earlier in the year the company released a spin-off for its upcoming racer in Radial-G: Infinity, again for the Google Cardboard. The free experience tasked players with outrunning a mechanical alien squid boss. Could this new project also be linked to the Radial-G franchise? Or is the developer planning to release a new IP for smartphones?

Either way, VRFocus will continue to follow Tammeka Games’ work in VR, reporting back with the latest from the developer.