It sounds strange to say this this early on, but The Box takes virtual reality (VR) back to its basics. Seattle-based developer 8ninths’ unique scene-building experience recalls the first software to be built around the release of the first development kit (DK1) for the Oculus Rift head-mounted display (HMD) three years ago by strictly focusing on that initial sense of awe and wonder that comes with stepping into a world in VR. As such, it’s an ideal experience to show off with first-time VR users, and something that you should keep an eye on going forward.

The Box is currently available as a free download off of the Oculus Concepts part of the Gear VR’s store. Right now the piece offers just one diorama of sorts, but 8ninths plans to add more in the future.

For now, the scene available offers a tranquil few moments that plays with a sense of discovery. You’re first introduced to a plain white room with a box sitting in front of you. It creaks open, letting you first peek at what’s inside before opening it up all the way. Doing so transitions you into the environment, which is at first dark and somewhat unwelcoming. Silhouettes of trees tower overhead and darkness engulfs you. The contents of the box itself are still present, however, appearing as miniaturised items that you’ll soon bring into the world. They include a moon, stars, snowflakes, a bear and fire.

Videogame veteran’s imaginations might start to run wild with what you might do with all of these items, but The Box keeps things civil. The objects are picked in order. The moon offers a small ray of light, letting you take a proper look at your surroundings for the first time. It’s suddenly a much more homely scene, with a fresh frost coating the ground and those thick trees now providing a sense of festivity, walling off the area. The stars only add to this effect, giving you a twinkling sky to longingly gaze up at and constellations to study.

Next comes the snowflakes, which appear as white squares that harmlessly flutter towards the ground. That’s the world itself complete, and The Box doesn’t hurry you to add the next ingredient, meaning you can enjoy the scene for as long as you want every step of the way. 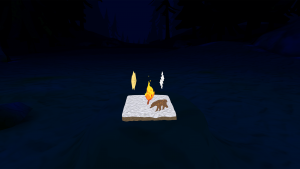 You might well feel apprehensive about adding the bear next, but rest assured it poses no threat. A few moments after selecting it, the beast will curiously plod out from behind the trees and sit itself down a few meters away. It will only come closer when selecting the fire, which brings up a cosy campfire right in front of the player. The bear isn’t alone, either.

That marks the end of The Box‘s first scene. If you were to rush through it, it would last just seconds, but that really isn’t the point here. You’re meant to take in the scene each time it changes and develop an appreciation of what each individual element brings to the table. In that sense, The Box could offer a far more interesting take on relaxing VR over titles that simply sit you on a beach or by a waterfall and expect you to spend time in environments that don’t really change.

If you’re uninterested in the type of VR experience that doesn’t offer any semblance of goals or objectives, then The Box won’t be for you. It will be, however, for the friends and family you’re yet to introduce the Gear VR to. For that reason alone, it’s worth downloading.