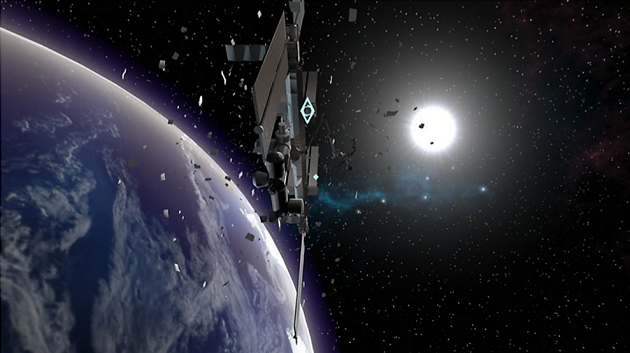 It’s fair to say that Gear VR has been lacking in content that truly proves its potential of late. Oculus VR and Samsung got the kit off to a great start in late 2015 with releases like Land’s End and Gunjack, while some gems like Orion Trail have also come along in the weeks that have followed. For the most part, though, there’s a lot of content that may be mechanically compelling but isn’t as immersive as you might hope. The platform’s yet to hit its stride, then, but a new release from SETAPP proves that it still has places to go.

Escape Velocity was released for free at the end of January 2016. It’s a sci-fi adventure of sorts, set aboard a partially decommissioned International Space Station (ISS) in 2038. Played from a first-person perspective, you venture out into the abyss to perform a standard maintenance mission that quickly turns into a fight for survival.

Emphasis on the word ‘quickly’. Escape Velocity takes about three to four minutes to see through, but that doesn’t stop it from being one of the more memorable experiences on the platform so far. It’s all about spectacle as it opens with an overwhelming cinematic in which the camera slowly (and more importantly, comfortably), pans around to the space station, with the Earth sitting just below it, threatening to swallow it whole. The sheer enormity of this scene is something to behold and it serves as a playground for a thrilling few minutes of VR fun.

You soon transition to the first-person view, which is cleverly obscured by the astronaut’s space suit. This gives you a certain sense of claustrophobia, with a real feeling of being nestled inside a big, clumsy getup that will keep you alive in an inhospitable environment. You press your face up against a window, treating yourself to that stunning view once more before a door opens and you’re let out into it.

It’s here the Escape Velocity opens up and gives you the ability to somewhat undignifingly glide around what remains of the ISS as you attempt to patch things up. The controls take a little getting used to, especially if you’re working with the touchpad where you’ll have to rely on head-tracking to steer, though a gamepad option is also available. While not necessarily nausea inducing, this can create some dizziness, so it’s best to gage a person’s adaptability to VR with another experience first before letting them loose on Escape Velocity. 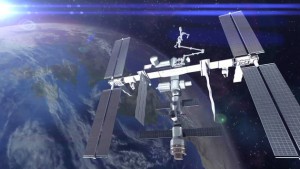 Once you’re in control, though, this becomes a liberating piece, especially when visiting the disaster-free free roam mode that’s available from the start. Hovering around the ISS and inspecting the nuts and bolts of one of mankind’s greatest inventions is a fantastic experience, even if it stretches the capabilities of the mobile platform its running on. If anything, it gives you all the more reason to get excited for ADR1FT, Three One Zeroes’ upcoming space survival adventure which offers a similar experience with higher fidelity visuals.

Both are clearly inspired by 2013’s Gravity, and they’ll be far from the last VR titles to take their cue from the celebrated blockbuster. And that’s okay; right now VR fans can’t get enough of these out-of-this-world experiences, and Escape Velocity is a welcome addition to them.

Escape Velocity is an immensely enjoyable experience that boasts impressive scale and convincing immersion. If you have a Gear VR, you owe it to yourself to take five minutes out to get lost in space.