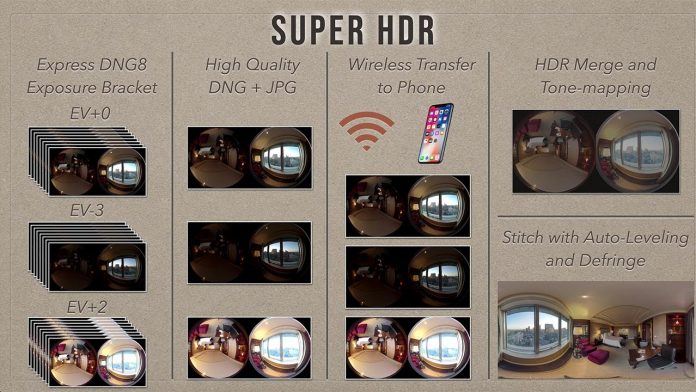 
How would you like a 360 camera that can take an HDR photo that is already stitched and merged in HDR in the camera, ready for you to use right away?  Qoocam 8k has gotten an upgrade that adds Super HDR 2.0, which can not only take an HDR photo but also merge and stitch the 360 photo in the camera.  This is especially useful for new 360 photographers or those who don’t want to have to stitch the photos afterward.  Here are the details.

Here’s the video by Yuqing Guo discussing the feature:

Super HDR differs in that it is a combination of median stacking and HDR.  As with HDR, it has a normal exposure shot, underexposed shot, and overexposed shot.  However, with Super HDR, each shot is a median stack of 8 shots to achieve lower noise and better shadow levels, so that there are 24 shots in all.  The disadvantage of this approach is that using it takes more time — around 30 seconds for a single Super HDR photo.

With Super HDR 2.0, Kandao uses a much smoother process. From the Qoocam 8K camera menu, you can choose Super HDR and you can choose to turn on DNG.  When you take a shot, it will takes 24 shots, then stack, merge, and stitche the photo in the camera with no need for the app.  The output will be four files: three unstitched 15-bit* Express DNG8 files (normal, underexposure, overexposure) in DNG format and one HDR 360 photo in JPG (8-bit), merged from the three Express DNG files.  [*That is not a typo – it really is 15-bit.]

Although the new in-camera stitching and merging is very convenient, you can get higher quality images with the three Express DNG8 files.  The three DNG8 files can be converted to TIFF using your preferred image editor such as Affinity Photo, then the three converted images can be stitched and merged into an HDR photo in JPG or PNG using Qoocam Studio 2.0.

For the absolute best image quality, you can also take several DNG8 photos (normal exposure, underexposure, overexposure), each of which will be a 16-bit DNG photo.  Each DNG8 photo is stacked from a burst of eight 12-bit DNG photos.  The stacking can be done either in the Kandao Raw+ desktop app or in-camera but not in realtime (the camera will merge them sequentially, one at a time), resulting in a stacked DNG8 file in DNG and in JPG.  Each DNG8 photo will be unstitched.  The stacked DNG8 photo would then have to be converted to TIFF before it can be stitched in Qoocam Studio.  Alternatively, the JPG version of the DNG8 file can be imported directly to Qoocam Studio.

HOW TO UPDATE YOUR QOOCAM 8K

To avail of the new Super HDR 2.0 feature, update your Qoocam app to version 3.7.1 or above (on iOS or Android).  After updating the app, the app will prompt you to download a firmware update.  Then connect your camera to the app, which will install the firmware for you.  With this update, Qoocam 8K is now only the second 360 camera to have in-camera HDR merging and stitching (the first were the Ricoh Theta series of cameras).

WHERE TO BUY; HOLIDAY DISCOUNT

Qoocam 8K is on holiday sale until January 3.  With my affiliate link you can get a free selfie stick with phone mount, in addition to the discount.