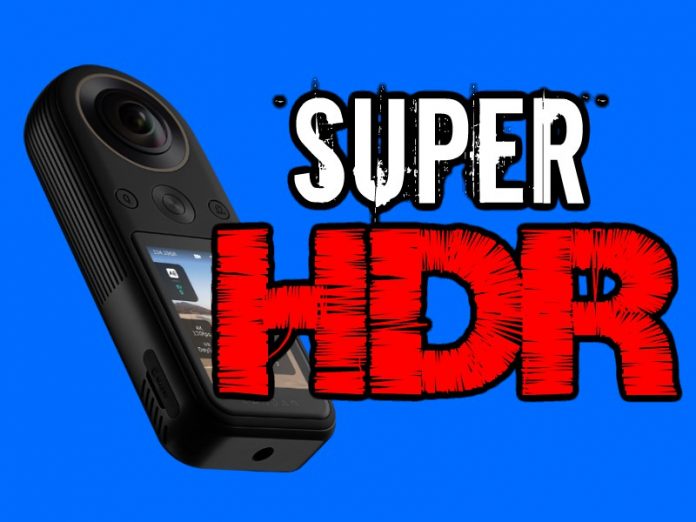 The most interesting mode to me is SuperHDR.  SuperHDR takes three ExpressDNG8 photos at -3EV, 0EV, and +2EV, then merges them to an HDR photo in the phone app. The HDR photo is in JPG and saved in your phone app. However, the three original Express DNG8 photos are each stored in your Qoocam 8K’s memory in DNG and JPG.

Here is a sample of SuperHDR:

Note: there is a noticeable difference between the front lens and rear lens due to glare, and there is slight warping.  If you use the HQ method (coming to 360rumors.thinkific.com), there is less glare, and no warping.

I also tested SuperHDR for indoor photos and it had enough dynamic range for a full color window pulldown in Sunny 16 weather.  Please note that SuperHDR is available only for iPhone 7+ or above. I hope they’ll add it to the Android app soon.

HOW DOES QOOCAM 8K COMPARE TO OTHER CAMERAS WITH THE LATEST UPDATE?

SuperHDR is now the Qoocam 8K’s best mode for minimal editing.  Previously, the best mode for minimal editing was DNG8, which had very good dynamic range but was a bit of a chore, requiring processing with two apps (stacking with Kandao Raw+ and stitching with Qoocam Studio). With SuperHDR, photos are stacked, merged and stitched in the phone app.  This is the easiest workflow thus far for getting a dynamic range of 10.0 on my rating scale (sufficient dynamic range for full color window pulldown in sunny 16 weather).

How about for a workflow for better image quality?  The HQ method (coming soon) produces similar detail and dynamic range but better colors and bit depth, and better stitching, so you’ll have to decide if the difference is worth the longer workflow (Qoocam 8K HQ method ease of use: 7.0). If you want to compare SuperHDR and the HQ method side by side, you can use the 360 camera comparison tool.

In summary, with this update, the Qoocam 8K now has one of the best quality for minimal editing (better dynamic range than Theta Z1‘s built-in HDR, but not as detailed as Theta Z1 or XPhase).  For higher quality editing, the Qoocam 8K is still among the top 5 (limited mostly by its detail).  If you’d like to get the Qoocam 8K, it is available from Amazon, B&H Photo (get a sales tax rebate with their Payboo card), or direct from Kandao.