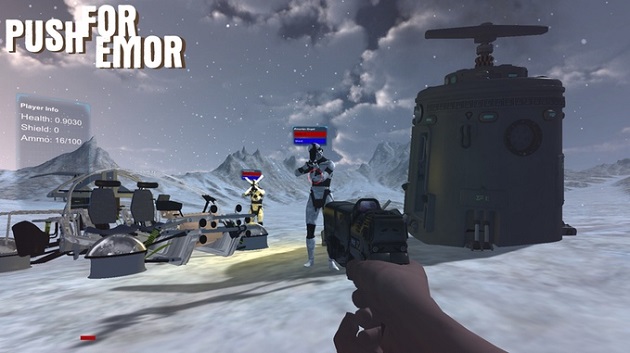 In January VRFocus reported on a demo launching on WEARVR for virtual reality (VR) title Push for Emor. UK-based developer Lupus Solus has now unveiled a Kickstarter crowd-funding campaign and a Steam Greenlight campaign to fund and promote the videogame.

Push for Emor is described as a mixture of sci-fi first-person shooter (FPS) role-playing game (RPG) and real-time strategy (RTS) by the developer. The story revolves around Emorian Empire which is starting to expand its territories into Justicar federal space, and you play an undercover agent sent to join a resistance group allied with Justicar.

The title currently supports the Oculus Rift DK2 head-mounted display (HMD) and Lupus Solus plans to add support for the Oculus Rift CV1 and the HTC Vive headset as well. The videogame will be spread across five solar systems with eleven planets to explore. Push for Emor includes both space and planet combat, with abandoned space stations to explore, a host of vehicles to aid your progress and much more.

The Kickstarter campaign is looking to raise £18,000 GBP over the next month, with funding needed to add extra polish to Push for Emor. While the videogame is virtually complete the funding will go towards areas such as: voice acting, custom made 3D models, a commissioned sound track, professional video production and professional 3d modelling animation.

Reward tiers being at £2 GBP to help support the campaign, up to £5000 GBP to have your likeness created and used as an mission giving NPC. Backers selecting a reward tier from £14 GBP upwards will get a digital copy of the videogame.

VRFocus will continue its coverage of Push for Emor, reporting back on any further announcements.