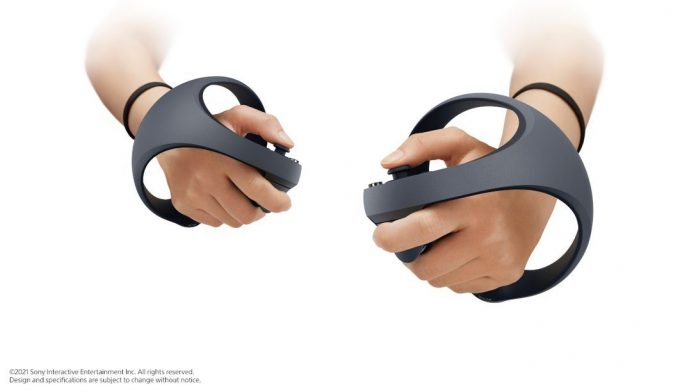 Playstation VR is the most popular 6DOF VR headset at the moment — even more popular than the Oculus Quest 2.   Sony has said that they are releasing a PSVR 2 but not in 2021.  Meanwhile, however, they revealed a few facts about the PSVR 2 and its capabilities.

Adaptive Triggers.  The PSVR 2’s controllers have adjustable resistance.  This can help you feel how hard or soft objects are.  For example a stuffed toy as opposed to a rock.  But it can be create even more sophisticated effects.  For example, if you are crushing a rock, the resistance may initially be hard and suddenly give way when you successfully crush the rock.

Better ergonomics.  With the current PSVR’s stick-like Playstation Move controllers, you have to hold them at an angle to aim a gun.  The new controllers will let you hold them at a natural angle when shooting guns in VR.

Probably not wireless.  Sony previously said that PSVR 2 will connect with a single cord while enabling a high-fidelity visual experience.  This has two possibilities.  The first possibility is that the PS5 will be connected to a wireless transceiver  that can communicate with the PSVR 2 wirelessly.  But I’ll tell you why this is not likely.  First, a wireless signal will need to be compressed, which usually degrades the image quality. Second, a wireless module will increase the cost of the PSVR 2, making it less affordable and shrinking its user base.
Instead, the second and more likely possibility is that the PS5 will connect to the PSVR 2 via a USB Type C cable.  With a wired connection, the PSVR 2 can have higher bitrates, and that’s probably why Sony mentions a high-fidelity visual experience.

Tracking area.  If you have PSVR, then you know it has a limited tracking area because you have to be within the Playstation camera’s limited field of view.  That is why the current PSVR is pretty much limited to a standing or seated VR experience.
PSVR 2 uses inside-out tracking as we mentioned. This means you can move as far as the cables can extend, and therefore a far larger tracking area.  In theory, you can even go around behind your TV if you want. You don’t need to be limited to a tiny space. If you haven’t tried other VR headsets, that larger tracking area makes a big difference in immersion.

360-degree tracking.  The other thing about PSVR is that it was limited to front-facing VR experiences.  If you turned around and the camera couldn’t see the headset or controllers, then it would lose tracking.  With inside-out tracking, PSVR 2 users can face any direction without losing tracking.  Again that makes the VR experience more immersive.

Compatibility. In an interview with GQ, Sony’s CEO Jim Ryan said ‘We’re making a completely new VR format for PS5.” This means that PSVR 2 is only for PS5. It also means that PSVR 2 games will not work with the original Playstation VR, even if you already have a PS5.
This could be a bummer for those who already have PSVR. On the plus side, developers don’t have to hold back to ensure backward compatibility and can use the full power of the PS5. So even launch games for PSVR 2 should look great.