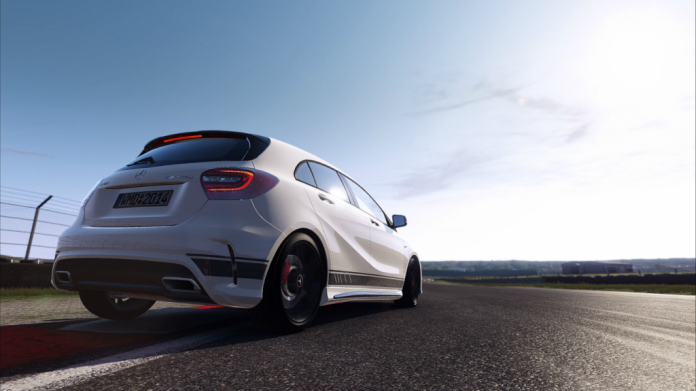 Going live today is Slightly Mad Studios latest update for its popular driving simulator Project CARS. The developer has released a steady stream of important additions to the title, with each one including further improvements for its virtual reality (VR) support for the Oculus Rift head-mounted display (HMD). These have included updating to the Oculus VR software development kit (SDK) 0.7 among others.

Announced on the Project CARS forum, the 7.0 patch centres around the user interface (UI) screens being correctly mirrored on a players main monitor. The full changelog of the VR content, from Slightly Mad Studios can be seen below.

A sequel has been announced by the developer but there’s been no confirmation if Project CARS 2 will support VR and the Oculus Rift.

The following entries refer to fields in the OculusSettings.xml file located in your Documents/Project CARS folder. This file is auto-generated the first time you run the game with the headset active.

VSync – “false” will ignore any user setting and use the code default (currently set to off). “true” will use whatever vsync is set to in the “graphicsconfigoculusdx11.xml” file in your Documents/Project CARS folder.

ResetVR – Changed automatic camera position reset at race start to be user controlled, providing 4 options:
0 – Always use Oculus system default position
1 – Reset view once at boot-up only
2 – Reset at start of race, but only once per execution of the game
4 – Reset at start of every race (supersedes case above)
These values can be combined by adding up, for example:
3 – Reset at boot and at start of the first race

NearZ – Overrides the game’s default NearZ value for player cameras (0.1). This value determines how close to the camera the 3D world will stop drawing. Setting this override to a value less than the default will allow for less clipping of objects close to the camera. Too low values may cause some texture flickering on objects in the game world. Try values around 0.05 as a starting point. Setting it to 0 will use the default game value.

GForce – Overrides the Camera Movement value that simulates G-force effects on the player’s head. Valid range is 0-1. Setting it to -1 will use the value set in the game options.

WorldMovement – Overrides the Camera Movement value that controls how the visible movement is balanced between the world vs the car. Valid range is 0-100. Setting it to -1 will use the value set in the game options.

exposureFOV – This field allows you to control the FOV that’s used to calculate the HDR exposure. This is very useful for closed-cockpit cars where the default VR FOV of 120 typically causes the outside view to be extremely bright. Setting it to 0 will use the default FOV.

VRFocus will continue to follow the progress of Project CARS support for VR, reporting back with any further announcements.