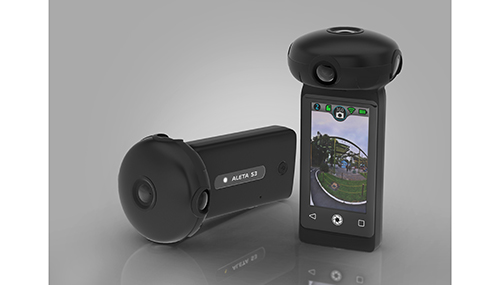 
Ultracker Aleta S3 is a new professional 360 camera that can reportedly take approximately 15k 360 photos (103 megapixels).  It is also claimed to be capable of 8k live streaming.

Ultracker Aleta S3 is the successor to the Aleta S2C, a high resolution 360 camera that takes photos up to 12K.   The Aleta S2C was unique in having five lenses, with four lenses horizontally and aimed slightly downward and one lens facing the zenith.

The Aleta S3 appears to have the same five-lens setup as the Aleta S2C, but with improved sensors.  Its claimed 15K resolution is among the highest for 360 cameras — even higher than some common DSLR 360 panorama configurations — and could make it very useful for virtual tours.

Aleta S3 also has a completely revised body that now seems to include a full color touchscreen, which will greatly improve its usability.  It is also notable that the Aleta S3 has 8K live streaming.   The Aleta S2C standard model had a video resolution of 4K but at only 10fps.  Ultracker hasn’t revealed the frame rate of its 8K live streaming mode, or whether it has 360 video capabilities.

Aleta S3 has been named a CES 2021 Innovation Honoree.

Price and availability have not yet been announced at the time of this post.  I’ll update this post as I find out more.