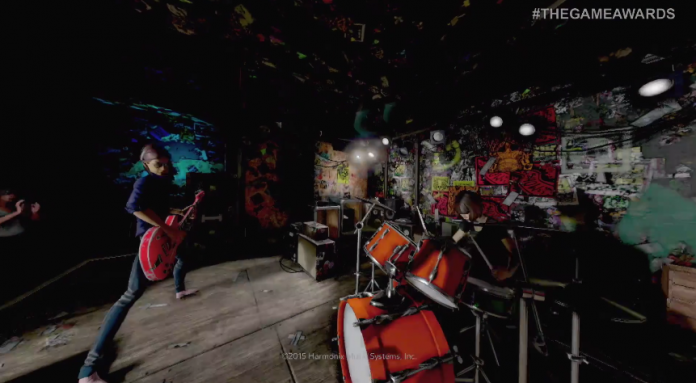 The announcement of Rock Band VR late last year caused quite a storm. Funded by Oculus VR, Harmonix now have dedicated team working on this project which stands firmly apart from all other editions of the videogame (including the recently revealed crowd-funded PC version of Rock Band 4). That being said, the gameplay will of course be familiar to anyone who has played any previous edition of the franchise.

The preview build available at this year’s Game Developers Conference (GDC), San Francisco, was limited to just one track – which may or may not be included in the final build – Aerosmith’s Walk this Way. The player has only the guitar track, with no option for bass, vocals or other instruments. This, sadly, will be the way the final product performs also.

At the beginning of this preview build the player has a set list of activities that need to be conducted, presumably for calibration of the player’s height, movement and the Oculus Touch controller mounted upon the guitar. These include turning on the guitar amp via gaze, speaking into the virtual microphone, and commanding your virtual drummer, Steve, to play you in. Once all of these functions have been performed, the curtains go up and the lights go on.

Rock Band VR is designed to give the player the feeling of being part of that band performing live on-stage. It’s at odds with this that the track displaying the virtual chords the player needs to be strumming sit at floor level between their position and the audience. The vast majority of the time spent playing Rock Band VR – at least while re-familiarising yourself with the dimensions of the guitar controller and the timing of inputs – will be spent looking down with the crowd almost entirely out view.

Harmonix insisted that they are designed further mechanics specifically for Rock Band VR with the idea of countering this issue, and that we’ll see more of them at this year’s Electronic Entertainment Expo (E3), Los Angeles, in June. Exactly what this might be is unknown, however the team did confirm that the final tracklist is currently intended to mirror that of previous Rock Band titles by offering 40 – 70 tracks at launch. VRFocus will of course keep you updated with further developments on Rock Band VR and other Oculus Rift titles funded by Oculus VR.