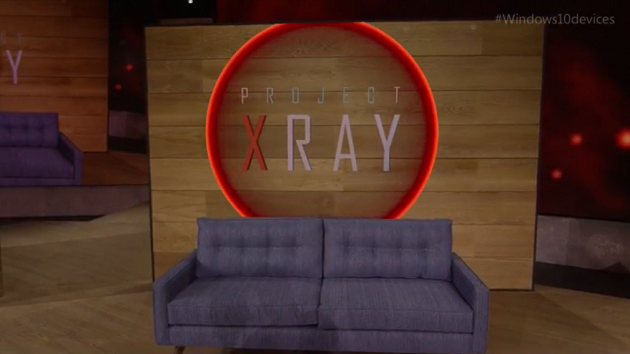 The HoloLens isn’t designed to be a videogames platform in its first instance, Microsoft have stated, and yet numerous entertainment titles have already been revealed for the title. Big franchises such as Minecraft and Halo have already featured in the revealed line-up, and most recently a brand new IP designed exclusively for the device, Project X-Ray, was announced at a Windows 10 briefing in October of this year.

Despite the HoloLens being billed as a ‘mixed reality’ device, Project X-Ray most definitely plays to the strengths of existing augmented reality videogames. The gameplay revolves around terminals drilling through the walls and releasing enemies – both crawling and flying – into the room. The player must take out these enemies as quickly as possible, targeting them with the centre reticule of the HoloLens and using the ‘finger tap’ gesture; raising the index finger on the right hand about a foot in front of the HoloLens display and lowering it towards the rest of the fist at the knuckle only. It’s a simple gesture that works remarkably well with the device, though it was odd that the recently revealed videogame input device wasn’t available in this demo. Indeed, this was the first instance of Project X-Ray being playable without it that VRFocus has learned of.

The player has only one single attack for the most part of this demonstration version of Project X-Ray, though each defeated enemy allows for a special X-Ray meter to build. Once full, the player can initiate a slowdown mode by saying the command ‘x-ray’. A power-up was supposedly available in the demo somewhere, though VRFocus was unable to locate this at any point.

Project X-Ray offered a scoring system which is displayed throughout the experience in the central spot where the player first begun the videogame. The action takes place on any and all vertical wall space surrounding this location (red indicators appear to show the location of enemies not currently in your field of view). Exactly how this scoring system worked was not entirely obvious, though given the confirmation that the HoloLens will in time support Xbox Live functionality it’s easy to see where Microsoft can start embedding competitive online features into the device’s videogame titles, even if it’s only through leaderboards at first.

The visual quality of Project X-Ray was impressive. Though limited in variety, the enemy character models appeared solid and were easy to locate without worry of being obfuscated by the detail of the real-world environment. The damage scored across the walls by the arrival of the enemy terminals was well placed; there was not a single instance of a virtual crack or breakage inappropriately appearing across a corner of the real-world room, which would have undoubtedly harmed immersion significantly. 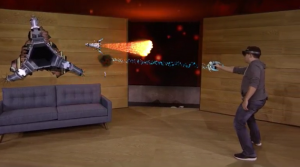 Project X-Ray may not be the groundbreaking gameplay experience that is expected of new technology such as the HoloLens, but it’s certainly an enjoyable earlier look into what is possible with the device. Whether or not we’ll see more of Project X-Ray in the future – or a spiritual successor based on the technology and lessons learned from its development – is impossible to know, but the fact that Microsoft is commissioning internal projects such as this so far from release suggests that the HoloLens may be more closely aligned with videogame entertainment than the official product marketing line might suggest.