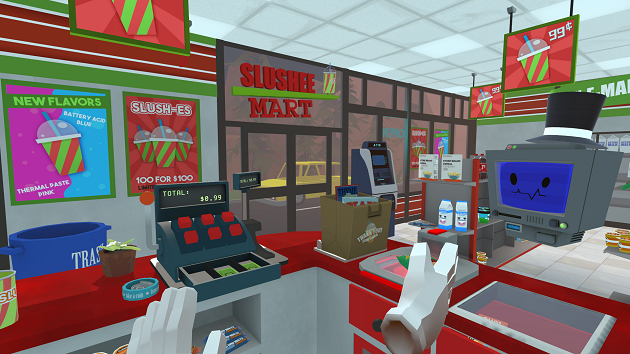 The second job of Job Simulator collection of 5 to be revealed, following the Chef’s Kitchen gameplay debut, Store Clerk is Owlchemy Labs’ rendition of managing a convenience store in a time when convenience has outstripped the demands living a life remotely familiar to that of present day. A simulation of a simulator videogame, Job Simulator is certainly benefit to unique presentation, and not just by way of its support for the HTC Vive and roomscale technology.

Just as with the Chef’s Kitchen level, Store Clerk makes no bones about you ignoring the objectives placed in front of you. There are even more interactivity and nuanced nods to the virtual reality (VR) industry packed into this second slice of gameplay and the majority of VRFocus‘ time with Job Simulator was once again spent exploring all of the many comedic effects that will happen from using object A with object B, either through the use of obviously interactive switches and buttons or simple brute force. Breaking the videogame in Job Simulator is part of the process: not in that of finding glitches, but actively avoiding the task at hand and using essential components for non-essential emergent comedy.

In Store Clerk, Job Simulator tasks you with serving customers (represented by variants of the Job Bot that is your guide in this tongue-in-cheek simulator simulation) by way of selling goods, accepting currency and returning excess change. That sounds boring on paper, but in practice the few minutes of motion-control based menial labour is fun. Fun in the reactions of those who you interactive with, and fun in the fact that messing about with them can still result in a job well done.

It’s not currently known if the preview builds offered to VRFocus represent the full extent of the gameplay in each level. Indeed, both Chef’s Kitchen and Store Clerk’s basic tasks could be completed in just a few minutes, if you were inclined to do so. However, Owlchemy Labs are quite clearly addressing the more enjoyable aspect of Job Simulator first-and-foremost; enthusiastic about packing each level with more-and-more wonderfully silly interactive opportunities. There’s absolutely no point in taking Job Simulator seriously, and thankfully the development team seem to realise it’s this facet of the videogame which is likely to strike gold.

However, the stupidity of Job Simulator and it’s gameplay mechanics merged at one point in the Store Clerk level, as a robber attempted to hold up the store at gun point. Without wishing to spoil the moment prior to the upcoming consumer launch, the comical nature of Job Simulator was matched by the dialogue and visual presentation within this one instance. Owlchemy Labs had already created a cohesive and pleasantly deranged universe up to this point, but at the moment when a robot attempts to recreate the human interaction of a convenience store robbery while sticking to its inherent rudimentary politeness, Job Simulator comes full circle. 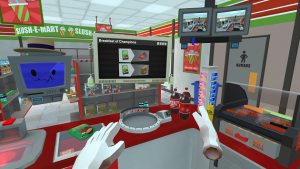 Of course, Store Clerk allows you to throw around objects, break things and generally make a mess just as much as the Chef’s Kitchen component, and this is once again fun. Discussing the technicalities of Job Simulator‘s use of motion-control and roomscale is fairly pointless; this is an experience that could not exist without them, but is designed specifically to make you forgot about them. Ignore the technical side of Job Simulator in favour of the fun, this is VRFocus‘ recommendation, but don’t make the mistake of ignoring Job Simulator as a serious contender in the HTC Vive launch line-up.