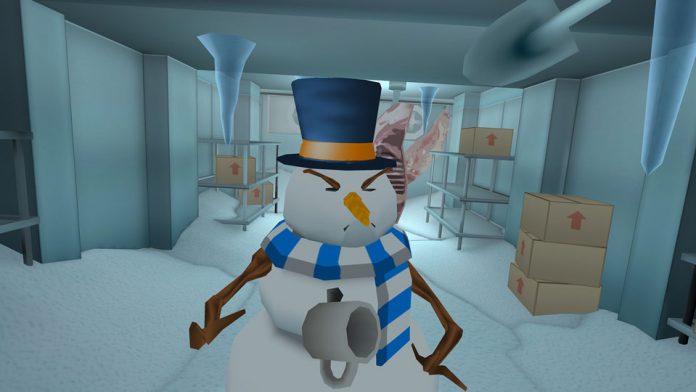 When it comes to virtual reality (VR) developers, Turbo Button are one to watch. Though the teams’ carnage-inducing racer, SMS Racing, is yet to see the light of day, it’s already released Adventure Time: Magic Man’s Head Games, a colourful, spritely translation of the popular animated series into head-mounted displays (HMDs). Its next project, Floor Plan, sees Turbo Button return to original IP, but retain the same bizarre sense of humour that it’s nurtured in its last two projects.

Floor Plan is coming to both the Oculus Rift and Gear VR soon and is clearly designed with the latter device in mind first and foremost. As such, this is the system VRFocus sampled it on at GDC. This is an unpredictable puzzle title in which players operate an elevator, moving from floor to floor of a building, solving puzzles on each. Your mode of transport is closer to a Tardis over anything else, though, as each floor presents a wildly different environment. Things start off on the edge of insanity with a sentient snowman trying to keep warm in a freezer before descending into complete madness with graveyards and pools of lava.

It’s the anticipation of travelling to new floors to check out what Turbo Button has in store for you that makes Floor Plan feel like such a lively VR title. The presentation here is incredibly refreshing, with cartoonish visuals that bring a slumbering pneumatic drill and a shivering snowman to life. The developer has also implemented some unexpectedly appreciated smaller details, such as being able to see your own breath on the freezer floor, a sensation that actually makes you start to breath deeper as you might on a cold winter’s day. It’s one of the nicest little touches yet seen in a VR title.

The puzzles themselves mix the slightest touch of logic with a heap of slapstick. One floor holds a mannequin that you’re trying to dress, and going looking for other items of clothing will involve digging up graves and unhinging icicles among other tasks. Brilliantly, you’ll have to keep in mind floor positions as you play; it might be that the solution to one area can be solved by causing havok on the floor above, for example. 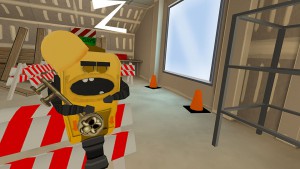 There’s a level of trial and error to these challenges, too. When you pour a cup of coffee, you immediately assume that the freezing snowman could use it to warm himself up. Imagine the surprise, then, when he takes on sip and spits it right back in your face. Maybe not. You’re not punished for making the incorrect moves, bringing this in line with as LucasArts-style adventure, though perhaps with a little more method to the puzzling madness.

Crucial to the Gear VR version of the title is that everything can be solved from within the confines of the elevator. It’s a smart design; Floor Plan is a standing VR title in which you don’t need to break immersion by travelling around with a gamepad, and yet can still experience a wide variety of locations without having to fade the screen to black and teleport around. That’s a little less paramount of the Oculus Rift experience, of course.

In Floor Plan, then, Turbo Button seems to be cementing its position as a developer of inventive, cheerful VR projects that highlight the tech’s strengths in ways that other studios might not think of. There were only a handful of floors on display in the GDC demo, though the developer is promising many more to make up for a couple of hours’ worth of gameplay. If the level of invention and intrigue created in the first fifteen minutes can be kept up for a full title, then Floor Plan could well be a delight.