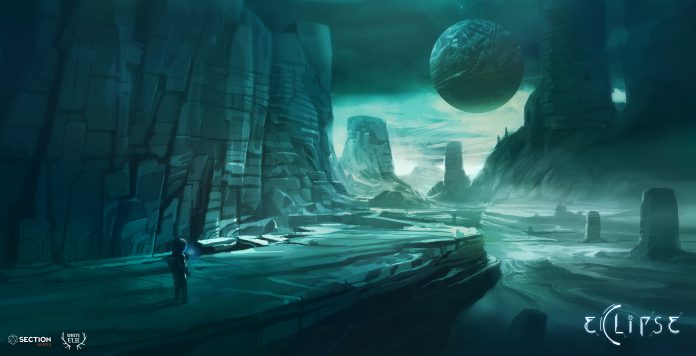 White Elk Studios’ Eclipse (working title) is somewhat of an anomaly for the current virtual reality (VR) market. As pure an indie project as can be, Eclipse exhibits high-quality production values in every moment of its very short playable demo. It’s a teaser for something much larger, and while the gameplay is incredibly limited at present, it’s a perfect primer for high expectations.

Armed with a DualShock 4 control pad and an Oculus Rift DK2 (though also on the way the PlayStation VR), the player is taken to a world that abides by the same rules as our own, but is aesthetically very different. It’s a colourful world in which the pastel shaded rock walls and blue hues of the floor provide a comforting setting, and yet there’s a certain darkness about the surroundings. Despite the pretty lilac and calming blues, there’s an eeriness about the silence of this place.

In this demo version the player has but two abilities (aside from movement): scanning and jetpack propulsion. The scanning ability has quite obviously been influenced by Metroid Prime and allows the player to gain access to the next location on their linear path. The eventual release version of Eclipse is likely to take this mechanic much further, expanding the backstory and offering additional gameplay opportunities. The jetpack however, is already presented at a remarkably impressive and stable quality.

Jumping in VR is often a painful experience. A common agitator of simulator sickness, many developers have opted to avoid it and instead build a videogame without the need for a jump mechanic. White Elk Studios however, have boldly done just the opposite. Not only can you jump, but you can climb to great heights using the jetpack. A quick change in acceleration and a constant incline are two things that are typically thought best avoided in VR, yet here in Eclipse it’s incredibly comfortable. It functions exactly as you would expect, yet without the fear of the unease caused by many other titles that have tried the same.

Why is this the case? White Elk Studios aren’t letting on, simply qualifying the results by saying that a lot of research and prototyping went into delivering the results VRFocus has experienced. It’s most certainly paid off, and in just these few brief moments with Eclipse it’s easy to tell that the studio is aiming for a very polished experience all round. If White Elk Studios can deliver even a fraction of the quality of this very early demo in a full multiple-hour VR experience, Eclipse promises to be something very special indeed.