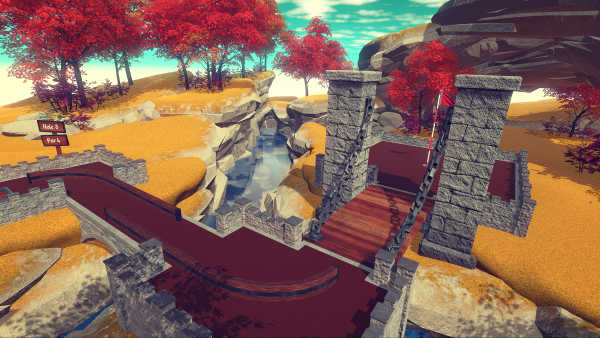 Golf is a popular sport that translates fairly well in videogames, smashing 300 yard swings down the fairway before teasing that little white ball into the hole at the end. But to spice things up minigolf was created that still retains the skill and challenge just over a smaller area, with some inventive obstacles added in. Its where Futuretown has decided to venture for one of its first videogames on HTC Vive, Cloudlands: VR Minigolf.

Cloudlands: VR Minigolf will be a launch title for the head-mounted display (HMD). It’ll feature an 18 hole course that can be played locally or online for some multiplayer challenges. Players will have the option to select three different club sizes as well their own ball colour for that personal look.

It’s easy to tell Futuretown has worked hard on making a videogame that utilises the Room Scale tracking on the HTC Vive. Getting a hang of swinging the virtual club doesn’t take to long to settle into, a few practice swings gives you a idea of the power needed. Whether its a little tap or you want to hit it full whack, the mechanics feel sold and robust enough to give you full control. Only one controller is required to play Cloudlands: VR Minigolf, but as with regular golf using two hands is a better fit for gameplay.

Some of the areas can become quite large and walking to the ball just wouldn’t be an option, even with the Room Scale technology being employed. The developer got round this by adding a teleport feature. Once you’ve hit the ball pressing the controllers trigger will instantly transport you to where the ball is. All you then have to do is reposition yourself to where you want to aim next and continue. 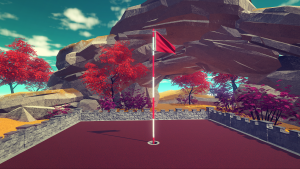 The selection of courses available are nicely varied, whilst increasing in their difficulty. The starting hole is just a straight forward put; hole-in-one fodder, while hole 17 is nightmarish spinning vortex of angled walls that protect the hole in the centre. It likely to be one of HTC Vive’s most addictive titles; as players look to perfect the perfect line and split second timing.

Cloudlands: VR Minigolf is shaping up to be an interesting addition to the HTC Vive launch line-up. With single player and multiplayer options there could be hours of gameplay available. But as with any golf videogame how long can you make 18 holes last before it begins to get repetitive.