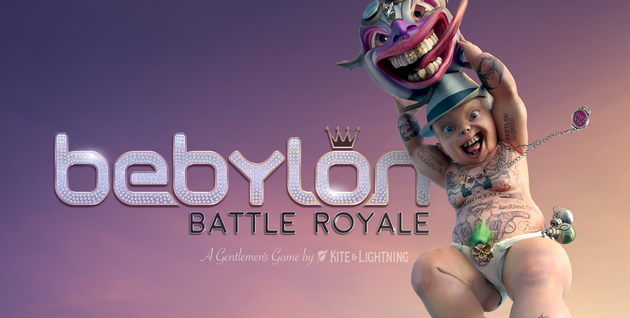 Kite & Lightning’s turn to videogames is long overdue. The team’s original works in virtual reality (VR) encouraged the community no-end, with Senza Peso in particular presented by many as one of the finest experiences available in the early days of the second Oculus Rift development kit (aka DK2). A couple of years of client-based work, also mostly in VR, has finally brought the studio to this point: Bebylon: Battle Royale.

As the name suggests, Bebylon: Battle Royale is suitably ridiculous for the two-man team that has spent so much time working on serious projects in the three years since the ludicrous K&L Station. The videogame casts the player as a baby remote-controlling a vehicle-mounted baby in an arena of death. The vehicles upon which they are mounted can punch and slap with giant flexible robotic fists will moving around the arena at high speed. We did say it was ‘ridiculous’, right?

The gameplay is compared to the hugely popular Super Smash Bros. series by Kite & Lightning, though in reality it’s closer to the Dreamcast’s Power Stone series. Players are allowed 360 degree movement around the arenas and can utilise a multitude of power strikes and collectable weaponry in order to gain the advantage over their opponent. Upon landing a strike that successfully removes the enemy from their vehicle the aggressor will rise to the audience applause and take a selfie, which is then displayed on a large monitor within the arena.

Smack talk has always been a big part of beat-‘em-up videogames, but in Bebylon: Battle Royale, Kite & Lightning are promising to up-the-ante. Audience participation will be key, and the studio is keen to implement a spectator mode wherein rooting for your friend or favourite player isn’t simply a case of cheering them on, but you can actively become involved in the videogame by issuing assists. The finer details of this are not yet available – simply because Kite & Lightning haven’t yet implemented it – but the implications for eSports gameplay are obvious.

Though Kite & Lightning assure that the build VRFocus experienced was very early, Bebylon: Battle Royale was already an impressively entertaining experience. The shifting, multi-layered arenas and the balancing of the available combatants can turn the tide of a fight in seconds. Given that the multiplayer gameplay is central to Bebylon: Battle Royale raison d’etre the videogame has clearly been designed from the ground-up with two-player competition in mind, and is exhilarating when victory draws close.