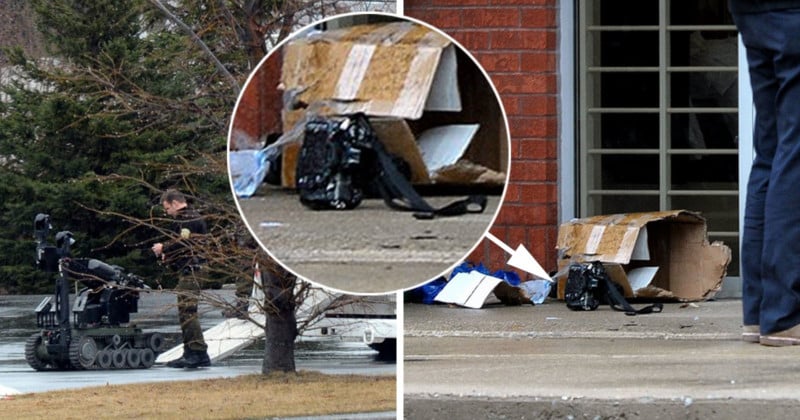 There was a bizarre story over in Canada recently that ended with a photojournalist watching his stolen Nikon camera equipment getting blown up by a bomb squad.

While shooting at a courthouse in Quebec on April 3rd, photojournalist Éric Beaupré had over $6,000 in camera equipment stolen after he left his bag in what he thought was an area reserved for the press. Gone were two expensive DSLRs and four pricey lenses.

A few days later, on April 7th, a large cardboard box mysteriously appeared at the front door of the newspaper L’Express. On the outside of the box was the word “explosive.”

As you might expect, this triggered a panic and the immediate attention of the Sûreté du Québec, Quebec’s provincial police force, which sent a bomb squad to investigate and neutralize the potential bomb. A large perimeter was also erected around the city block as a precautionary measure.

After investigating the box at the scene, authorities determined that the best course of action would be to blow up the box.

“According to the information we had, there was a possibility that the package would be a danger,” says police spokesperson Ingrid Asselin, according to the Le Journal de Montréal. “This is the procedure in such cases.”

Once the box was detonated, police found that it contained two DSLRs and four lenses.

L’Express reports that it had received at least one threatening letter and call in the weeks leading up to this bomb scare, including from a man who had taken issue with how he was portrayed in a news story. A man in his 20s was also arrested by police shortly before the package was detonated.

Beaupré says that the camera gear loss was both financial and personal. It turned out his insurance would only cover about half the value of the lost gear, which included Beaupré’s very first camera bag that has a great deal of sentimental value to him.

He says he regrets dropping his guard for those 4 minutes at the courthouse, a decision that turned out to be a very costly mistake.

P.S. Back in August 2016, a photojournalist in Kansas City, Missouri, also had his equipment blown up by a bomb squad after he accidentally left his camera bag outside of city hall.

Image credits: All photographs by Éric Beaupré and used with permission