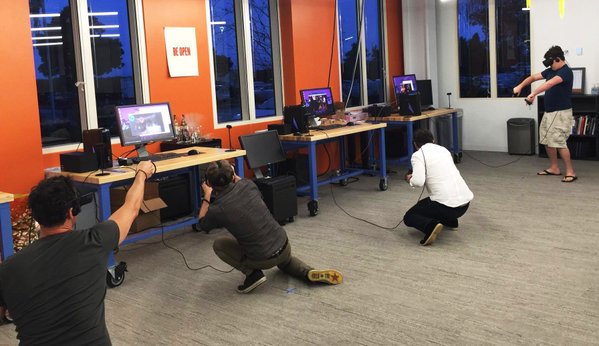 With less than a week to go before the Game Developers Conference (GDC) 2016 takes place in San Francisco, California, new details of what to expect at the show are being released. Today sees confirmation from Jason Rubin, Head of Studios at Oculus VR, that Oculus Touch shooter Dead & Buried will be available at the west coast event.

Rubin revealed the information on his Twitter account, writing: “Prepping hard for #GDC16 “testing” #DeadandBuried 2v2 multiplayer w/ “Deathbringer” @PalmerLuckey and @brendaniribe.” Along with the post was a picture (seen below) of Oculus VR founder Palmer Luckey and Oculus CEO Brendan Iribe with two others playing Dead and Buried in a two on two multiplayer. Further down his post Rubin reveals that “Deathbringer” refers to Luckey, “Palmer’s nickname. He’s a perfect shot,” he says.

With GDC 2016 being the last major videogame event before the consumer release of the Oculus Rift head-mounted display (HMD), Oculus will likely have a few surprise announcements. While its likely to come in the form of software announcements, as Rubins post indicates, the Oculus Touch motion-controllers will be making an appearance and little news has been released on its development for a while now.

VRFocus will be at GDC 2016 to bring you all the latest VR news and announcements.