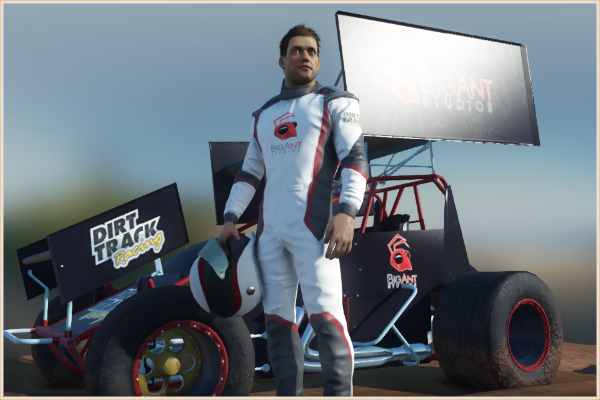 Certain genres of videogames fit into virtual reality (VR) better than others, and racing titles have that compatibility. And for those who do love racing, developer Big Ant Studios has created a Kickstarter crowd-funding campaign to help finance its next title, Dirt Track Racing.

Big Ant Studios aren’t new to this genre of videogames, having previously developed Road to Knoxville, Road to Eldora and World of Outlaws Sprintcars for PlayStation2, XBOX 360 and PlayStation 3. The team are looking to raise $266,000 USD by Sunday 13th March to bring the project to life.

If the studio hits its first funding goal Dirt Track Racing will include features such as: single player career; a driver academy to create your own driver; a venue editor; track editor and dynamic racing, which has full time-of-day and weather transitions, simulated tire wear and dynamic track conditions. It will also support simulator racing peripherals, 900 degree steering wheel support and VR head-mounted displays (HMDs) including the Oculus Rift.

There are also a number of stretch goals which will add further functionality. At $392,500 USD 30 Player Online Multiplayer will be included as well as All Inclusive,  giving the option to create, edit, share and download female drivers, crew and officials. Multi-monitor surround support for PC Steam releases will also become available.

The stretch goals go all the way up to $1,500,000 USD which would give players complete control over creating their own tracks, race series and more. The current funding stands at just over $39,000 USD.

VRFocus will continue its coverage of Dirt Track Racing, reporting back any new updates from Big Ant Studios.

The post Oculus Rift Could be Getting Dirt Track Racing Thanks to Big Ant Studios appeared first on VRFocus.