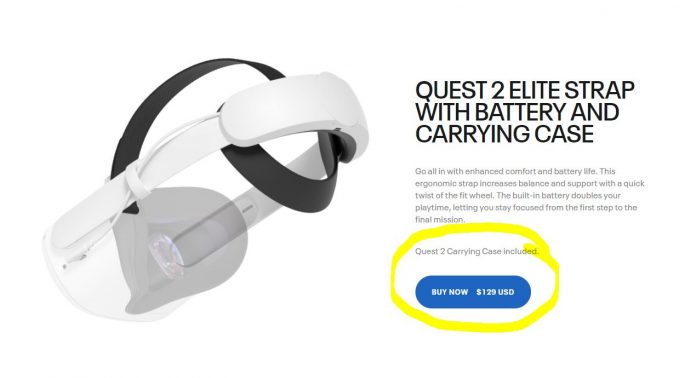 
The Oculus Quest 2 Elite Strap with Battery is now available for order again.  Here’s why you should get this accessory if you have a Quest 2.

The Oculus Quest 2 Elite Strap with Battery has been without a doubt the most sought-after accessory for the Quest 2.  Not only does it replace the flimsy headstrap included with the Quest 2, but it also has a battery that offsets the weight of the front-heavy Quest 2 while also letting you use your Quest 2 for marathon wireless PC VR sessions.

The Elite Strap with Battery rapidly sold out when Quest 2 launched.  Worse still, users reported some of the straps were breaking, causing Facebook to announce that they would temporarily halt shipping the Elite Strap, which exacerbated the supply issue.

But now the Elite Strap with Battery is available again on Oculus’s website.  It’s not exactly in stock because delivery is going to be for late January (I ordered mine today and it’s due for shipping on January 21).  Nonetheless, I’m glad that at least I’m on the queue for this extremely hard to find accessory, which have sold for as much as $329 on eBay (they are sold listings) — which is more than the $299 starting price for the Quest 2.

Ggnome webm - 23 Febbraio 2021
0
Pano2VR 6.1.11 has been released. This release fixes a number of issues and it includes a few small improvements. What’s Been Improved...
©
MORE STORIES