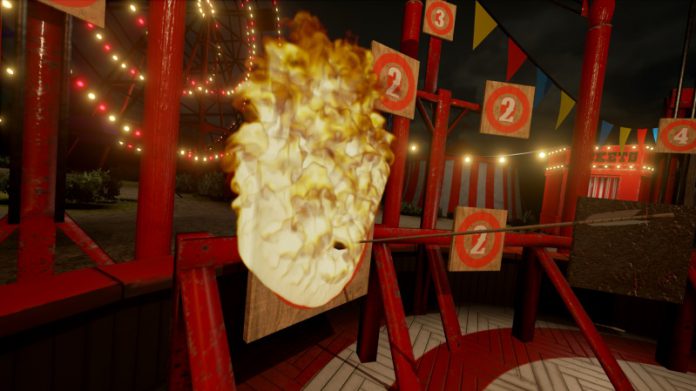 NVIDIA’s efforts to push the progression of modern virtual reality (VR) have not gone unnoticed. The launch of VRWorks as suite to aid development last year and its continued updates, along with VR-centric developments on the GPU front, are arguably the most aggressive initiatives of any hardware manufacturer outside of the head-mounted display (HMD) carrying companies themselves. Now however, NVIDIA has launched the company’s first VR software title; moreover, VR Funhouse is the first software title in its 23 year history.

VR Funhouse is as much a videogame as it is a technical demonstration of the lengths NVIDIA has gone to aid VR development. It’s a showcase piece; a method of presenting the results attainable with VRWorks’ various tools in an entertainment format opposed to through diagrams and conference talks. And to that end, it’s a fantastic endeavour achieving all of its goals.

As a videogame in its own right however, VR Funhouse is a mixed bag. It’s a mini-game compilation that has a pleasingly cohesive theme, yet it still feels loosely contained. Like many of the current VR offerings much of VR Funhouse is an enjoyable and even exciting experience on the first play, but offers little incentive to return. Therein plays NVIDIA’s intention to expand the line-up of content through user-created mods.

Part of VR Funhouse’s raison d’etre, as announced alongside the videogame itself, is to foster a community of design using VRWorks and incorporate these into the main videogame alongside the seven starting mini-games. At present, there’s no information on when such community developments will begin to appear – or even how to create or submit your own designs – but given NVIDIA has held true to their convictions on lowering the entry requirements and offering VR Funhouse for free, it’s surely only a matter of time.

What is there is a showcase of the many VR effects NVIDIA now catalogues under VRWorks. PhysX Destruction, FleX Fluids, HairWorks, NVIDIA Flow, Multi-res Shading; the list of singular technologies now held under the same banner is near-endless, and their use throughout VR Funhouse is what makes the experience a higher calibre than most. To the untrained eye it’s simply a case of clever design; but that’s exactly why these technologies are important.

VR Funhouse is not a groundbreaking achievement in terms of videogame design – far from it in fact – but it is a palatable test bed for VR keen developers to see what keen is possible to achieve with NVIDIA’s technologies. It’s fun in the short term and will hopefully be expanded in due course, but more importantly it manages to convince that realistic simulations of physics, liquids and hair are no longer out of reach of GPU-hungry VR experiences.