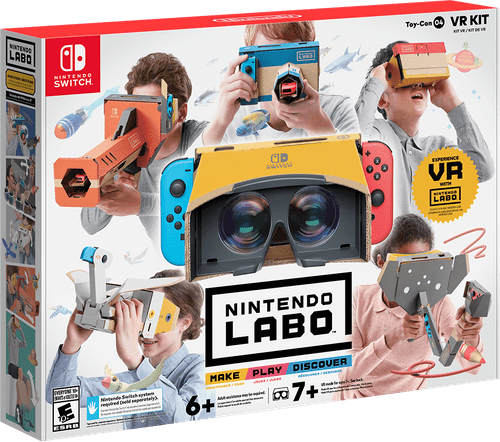 
Nintendo announced that VR would be coming to the popular Nintendo Switch console via the Labo VR Kit.  Yes, it’s real.  Should you get one? UPDATE: preorders now available.

When Nintendo Switch was first announced, there were rumors that it would have VR capabilities.  However, in October 2016, Nintendo of America President Reggie Fils-Aime quickly quashed those rumors by saying that Nintendo was still waiting for VR to be at the point of being “mass market adoptable.”

Well, apparently, in Nintendo’s judgment, that time has come.  On March 6, Nintendo announced a Labo VR Kit to enable the Nintendo Switch to be used as a VR headset.

For those unfamiliar with Nintendo Labo, it’s a series of user-assembled cardboard toys with minigames for the Switch.  For example, in the basic kit, you can build a cardboard piano with an insert for the Switch, and if you press its keys, it would play sounds.  (My kids enjoyed it, although TBH they don’t play it much now, and instead they are playing Pokemon or Super Smash Bros. Ultimate…)

What can Labo VR do?

Likewise, Labo VR Kit is a cardboard VR headset (not the first such VR headset) that uses the Nintendo Switch instead of a phone.  In its most basic form, the VR Goggles can be used to view VR videos of stars and planets.  At this point, Nintendo hasn’t said whether you’ll be able to view standard 360 photos and 360 videos (note that the Switch has an SDXC Micro SD slot).0

The VR headset can also be inserted in toys with minigames.  Nintendo hasn’t shown the details for the VR minigames but here is the list: 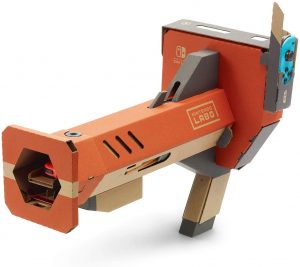 Blaster: this is a toy gun with what a type of shooting game.  You’ll “pump” the gun to hit your targets instead of squeezing the trigger so it’s possible that it might be a water gun game. 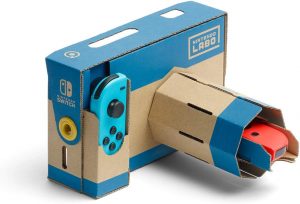 Camera: this is a toy camera with an underwater photography game.  As you look around the ocean in VR, you can rotate the “zoom” and press the shutter to take photos of fishes and other sea creatures. 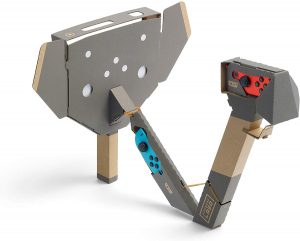 Elephant: this is a toy elephant head with a movable trunk.  You’ll control an elephant and use its “trunk” to reach food or other objects. 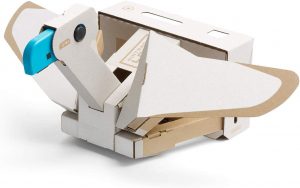 Bird: a toy bird with movable head. Presumably, this will incorporate a game where you fly around in VR. 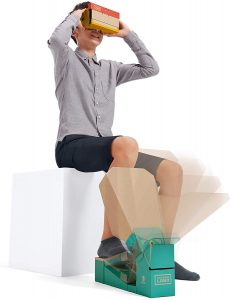 Wind Pedal: it’s unclear how this pedal will be used, but I speculate that it may for a music or rhythm game.

Analysis: how well will it work?

I’m honestly surprised that Nintendo has decided to create this kit.  There are already many low cost VR headsets, and everyone already has a smartphone that will be lighter and will have a higher resolution screen (and much higher pixel density) than the Switch’s 1280 x 720 display.  I am also not sure whether Nintendo Switch’s gyroscope is good enough for VR.

On the other hand, if anyone can pull this off, it would be Nintendo.  I’m sure you recall the Nintendo Wii, with its simple but fun games, which eventually went on to sell over 100 million consoles.  I’m almost certain that the VR will have lag, ghosting, SDE, chromatic aberration and other issues over which VR afficionados will wrinkle their noses, but I’m just as certain that at least some of the games will be fun.  We’ll find out.

Labo VR will be released on April 12, 2019.  There will be two versions: a deluxe kit with all the toys ($80) and a starter kit with the blaster game ($40) and two expansion packs of two toys each ($20 per expansion kit). I’ve ordered the Labo VR Kit and will update this with a review.