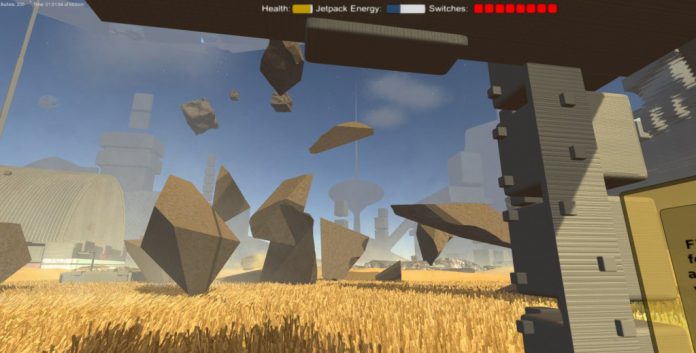 In the distant future everything seems peaceful. You go about your business without so much as a care in the world, safe in the knowledge that very little in the way of trouble is ever going to be coming for you – and boy, are you wrong.

As another week of virtual reality (VR) news comes to an end we wrap up our regular New To VR’s with a Friday trip to the Steam store and to a new videogame title that is supporting the Oculus Rift. A combination of shooter, platform and puzzle game, All Fall Down sees you awoken one day by sounds of destruction and chaos as mysterious debris rains from the sky. What is causing this deadly shower of rock and steel?

It’s up to you to unlock the pathways that will allow you to ascend up the nearby towers and traverse mazes and obstacles in order to find out what is going on, stop it, and hopefully save the lives of not only you but of the world.

Oculus support is a new addition which can be found listed under the beta menu for the game. At the time of writing All Fall Down can be purchased from the Steam store for £5.99 (GBP). You can see the Steam trailer for the videogame below:

New To VR may be a bit sporadic next week as we at VRFocus bring you all the coverage from Paris Games Week.  We’re expecting at least one of the major VR platforms to make a strong showing so be sure to join us then.

The post New To VR: The Sky Is Falling In Steam Title All Fall Down appeared first on VRFocus.