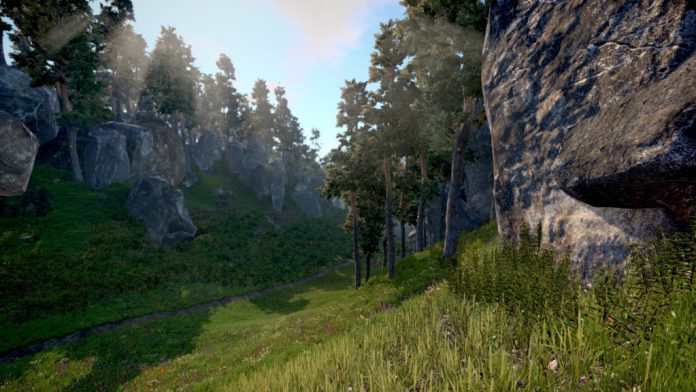 New To VR is back today to shine our morning spotlight on a potentially virtual reality (VR) supporting videogame currently undergoing a Steam Greenlight campaign.  The game is called Virtual-O, short for ‘Virtual Orienteering’ and as you might surmise from a name like that the game involves you running across plains and through forests, hitting targets with only a map and a compass to assist you.

If that sounds a bit of an odd premise for a videogame, that might just explain the current Greenlight campaign.

But here the real star of the show is the scenery; modelled, according to the developers, on real forests. Whilst your goal is obviously to be as fast as you possibly can be, there is nothing to stop you taking in trees, the blue skies the rocks and the clumps of wild heather. If you’ve recently played the excellent Firewatch – a candidate for Make It A (Virtual) Reality if ever there was one – you’ll know that whilst there’s no story here there’s something to be had for just taking in the in-game scenery, and if you had the chance to do that in VR it would certainly be worthwhile trying.

You can take on a number of challenges in Virtual-O including taking advantage of the game’s day-night cycle to take on tougher courses in the dark and you can even set your own courses up. That and of course learning the skills of orientation themselves which, as the game points out, can be lifesaving. You can see a trailer for Virtual-O below, and you can vote for the experience here.

New To VR will be back soon on VRFocus. If you have a new game or experience coming out you can email us at community@vrfocus.com and we might well feature it in a future piece.

The post New To VR: Grab Your Map & Compass For Virtual-O appeared first on VRFocus.