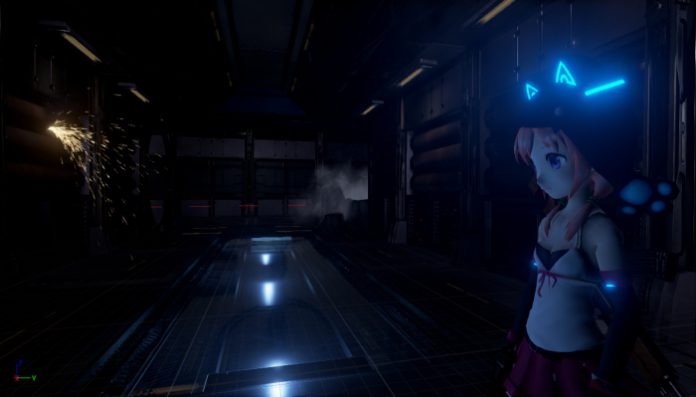 When it comes to Oculus VR Share there’s a lot of experiences that are released, one of the joys of that is that there is such a vast selection of different experiences, play styles and gimmicks that always keep things fresh. Today’s virtual reality (VR) videogame has the somewhat usual title of Girl In Miniature Garden, which appears to have been a bad translation.

In it you take on the role of a anime-style young woman who is equipped with a pair of neon cat ears and toting an automatic weapon. (As you do.) It’s up to you to navigate her through a strange apparently underground facility full of dark maze-like corridors, darting for cover as you fight of mysterious adversaries including giant killer robots. The unusual twist though is that much like the original Resident Evil games your camera is in a third-person mode, and you are watching and controlling the game as you see it through the security cameras.

An Oculus Rift DK2 title, Girl In Miniature Garden requires a pre-0.6 SDK. Additional requirements and control information can be found via the Oculus VR Share page. A gameplay trailer can be seen below.

VRFocus will return soon to shine the spotlight on another videogame or experience that is new to VR.