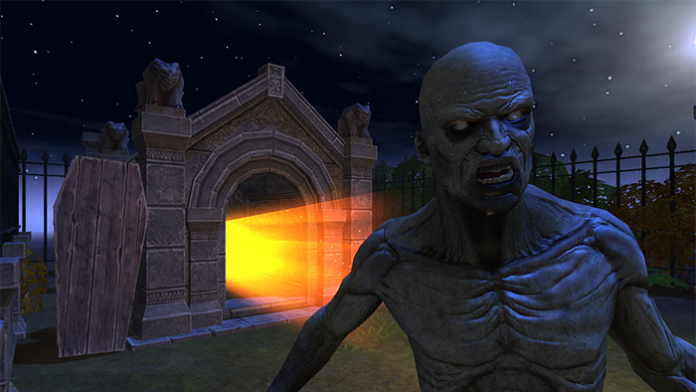 If it weren’t for the number of rollercoaster or space-based apps it is quite possible the most prolific experience on Oculus VR Share would be those featuring the undead. One day all three will finally coalesce and produce the zombies on an outer space rollercoaster ride we’ll have all been waiting for. Thankfully today’s offering from Oculus VR Share is more traditional zombie fare.

ZomVR is a simple wave-based survival game in which you take on the hoards of the not-quite dearly departed as they make a break for the civilized world and an early breakfast of brains.  Armed with a crossbow you must prevent them leaving the graveyard and, of course, killing you.

Developed by Nick Vifian and Joe Frusetta this free to download shooter supports of the Oculus Rift DK2 head mounted display (HMD) and requires an SDK version of 0.6 or above. Further information related to the system requirements can be found on the Oculus VR Share page.

Join us tomorrow on New To VR as we round of the week with another Oculus Rift experience you can download and try.

The post New To VR: Face Off With The Undead In ZomVR appeared first on VRFocus.