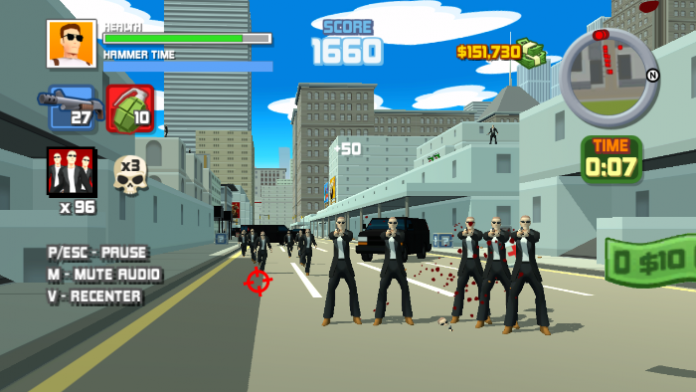 It’s the end of the week and I don’t know about you but I want to kick back and blow off some steam – and if you feel the same way then we might just have the virtual reality (VR) experience for you.

Rampage sees users take on the role of Agent Bruce – essentially every 80’s action film cop ever, he’s got a passion for law and justice and a distinct knack of blowing the heck out of everything in sight. Be it the bad guys he is fighting, the police or the army should they get in his way when Agent Bruce is on the job he’s just a witty oneliner and a bazooka away from carnage.

The game that follows has you guide Agent Bruce around the city with the goal of blowing up as much of it as possible whilst ridding it of the criminal element in as explosion-generating a way as possible.

Developed by PellonGames, Rampage is an Oculus VR Share title supporting both the Oculus Rift DK1 and DK2 head-mounted display (HMD) and requires an SDK version above 0.6. For further technical specifications please see the Oculus VR Share page linked above. You can see the official trailer of the game below:

New To VR will be back on VRFocus next week with more new VR experiences and videogames.