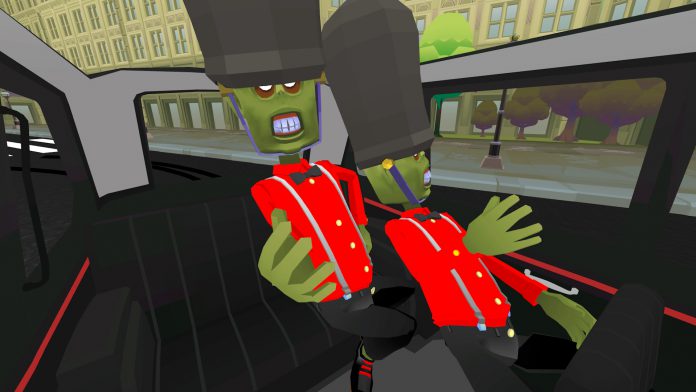 Virtual reality (VR) has no shortage of wacky experiences. Among them is The Modern Zombie Taxi Co., a new title for the PlayStation VR head-mounted display (HMD) for PlayStation 4. Revealed at this month’s PlayStation Experience fan event, this new project is being developed by Vitei with the help of Sony Santa Monica. Now, new details on this first-person taxi driving experience have revealed, providing a little more information on its setting and core mechanics.

The new details were revealed in the latest issue of Game Informer, which takes a look at a range of VR titles. The Modern Zombie Taxi Co. is apparently set ‘hundreds of years’ after a zombie apocalypse, with the undead evolving into intelligent beings with their own society. Players are cast as a taxi driver in the town of Zombieton and must make as much money as possible by ferrying others around. Control-wise, players will use the DualShock 4, but are able to utilise the pad’s motion controls, pushing zombies out of the way when they walk into view.

Powers-ups will feature, though some of them won’t actually help. These include a Gatling gun that destroys valuable targets and an item that fills your own car with beach balls. There’s even a boom box that will force zombies to start dancing. Hitting large objects could send your zombies flying out of the car, though fast driving will be rewarded. Zombieton also has easter egg-like features to score bonus points such as driving on top of a see-saw to launch a zombie child into the air.

It’s not yet clear when Vitei will release the title, though PlayStation VR itself isn’t expected until the first half of 2016. VRFocus will continue to follow The Modern Zombie Taxi Co. closely, reporting back with any further updates on its progress.