HoloLens, Microsoft’s mixed reality (MR) head-mounted display (HMD), starts shipping as a developer edition to the US and Canada today. For $3,000 USD, studios can be one of the first to start working on the platform, albeit without any knowledge of the eventual consumer release. But what will you actually get in the box, and what does that box look like? Those questions have been answered today, with the release of the first images of the HoloLens packaging and its contents.

The first image, seen below, was taken from the Build keynote speech at today’s Build developer conference in San Francisco, California. It shows a glossy box for the developer edition, which can again be seen in the second image. More interesting here, though is the reveal of the Clicker controller, a device mentioned only in passing before. This is a one-button piece of kit that will charge via microUSB, allowing HoloLens users some control over experiences without the usual gesture inputs.

Check back with VRFocus for the latest on HoloLens. 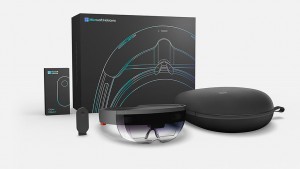