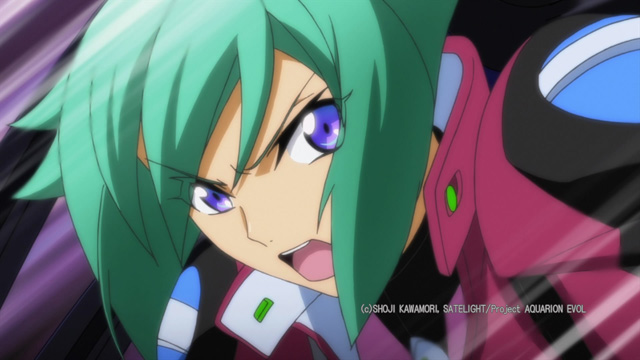 Back at the 2015 Tokyo Game Show (TGS) in September Sony Computer Entertainment (SCE) revealed a wide range of new videogames and demos for its PlayStation VR virtual reality (VR) head-mounted display (HMD) for PlayStation 4. Famous series such as Final Fantasy, Danganronpa and Dynasty Warriors made their VR debut on the device while others were based on popular hobbies such as karaoke. One title that was shrouded in mystery, however, was a new VR experience based on the Aquarion Evol anime series. Though a title was revealed for the demo, it wasn’t clear exactly what it contained. Now new details of that experience have been revealed.

According to SCE’s official PlayStation VR site for Japan, translated in Google, Aquarion Evol uses PlayStation Move, the VR-compatible motion controller to allow players to engage in pilot training for robots. It appears that players use two PlayStation Moves to control the left and right arms respectively. Eventually, players will be able to use the controllers to shoot down enemy aircraft. The content appears to have been developed by the original animation studio behind the series, Satelight, with the help of executive director Shōji Kawamori.

It’s not yet clear if Aquarion Evol is a simple tech demo or a full videogame. Even then, the title hasn’t been seen over in the West yet and may never come over here. Earlier this week it was revealed that another PlayStation VR compatible videogame, Dead or Alive Xtreme 3, wouldn’t be releasing in this territory due to the controversy surrounding its depiction of women. PlayStation VR itself isn’t set to release until the first half of 2016, though specific details such as a final date and price are yet to be revealed.

VRFocus will continue to follow any and all titles for PlayStation VR, reporting back with the latest updates on them.