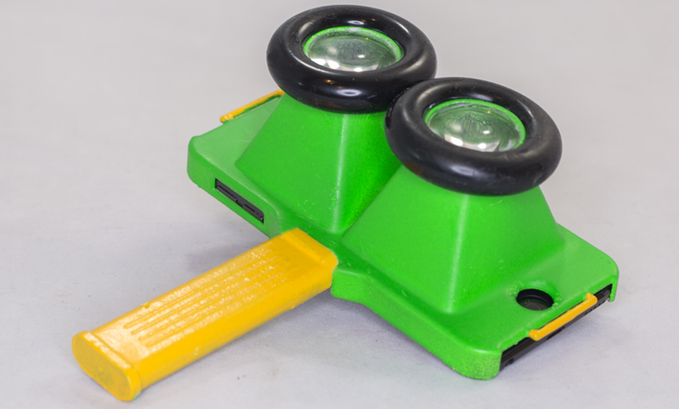 Virtual reality (VR) is heading to the consumer market over the next few months with the arrival of head-mounted displays (HMDs) such as the Oculus Rift and HTC Vive. It’s an exciting time for the industry, but the arrival of this new medium also brings about a new set of concerns. Its use with children is one such area for a variety of reasons. Samsung and Oculus VR, for example, have set a minimum age requirement of 13 to use the Gear VR mobile-based HMD. Despite this, a new HMD aimed entirely at children named NEODiVRjr is in the works.

NEODiVRjr has recently launched a Kickstarter crowd-funding campaign looking for some $14,950 USD to bring the product to market. The device is another mobile-based kit in the vein of Google Cardboard or Gear VR, though is actually designed to work not with a smartphone but instead Apple’s iPod Touch. It consists of a simple plastic casing that houses a pair of lenses users can slip the iPod Touch 6G in front of. The kit’s interpupillary distance (IPD) is designed specifically with children in-mind.

The device is compatible with apps that support Google Cardboard and features a detachable handle that users can hold. It also comes in two forms: a basic version and an ‘xTREME’ edition that includes a hinged lens box to allow users to easily switch between apps and use their device. Those interested in the kit can pledge $10 to receive a ‘Paper Edition’ of the kit, while $19 will grant them one of the first editions of the basic kit. Shipments are expected to be made in January 2016 pending the campaign reaching its goal by 14th December 2015.

VRFocus will continue to follow any and all VR devices, reporting back with the latest updates on them.

The post NEODiVRjr Is a VR HMD Just for Kids, Kickstarter Launched appeared first on VRFocus.