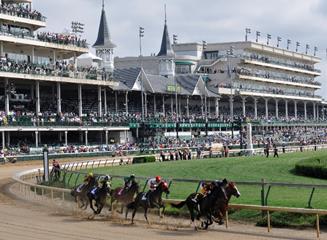 It’s been a week of announcements in regards to virtual reality (VR) content creator NextVR. So far the company has revealed a partnership with Time Inc. to distribute LIFE VR, and a collaboration with Live Nation to stream concerts and events for the firm. Today NextVR has unveiled another partnership this time with NBC Sports Group, to live-stream the Kentucky Derby in VR.

“We are excited to bring the pageantry and passion experienced annually by those at the Kentucky Derby even closer to viewers at home with the new medium of live virtual reality,” said Rob Hyland, coordinating producer of NBC Sports Group’s Triple Crown horse racing coverage.

NextVR will setup seven VR cameras for the presentation from Churchill Downs. Five cameras will be placed trackside to capture an uninterrupted view of the race, including one adjacent to the owners’ suites, while two cameras will be in the paddock area to showcase the horses before parading to the starting gate. Commentary will come from NBC’s Larry Collmus, as well as NBC announcers Tom Hammond, Jerry Bailey and Randy Moss.

“We’re going to wire our viewers directly into one of the most exciting, spectacular experiences in sports,” said Dave Cole, NextVR co-founder. “This is a show not to miss.”

The live-stream can be viewed through NextVR’s app, which is available on the Samsung Gear VR head-mounted display (HMD).

VRFocus will continue its coverage of the latest NextVR news, reporting back any further announcements.