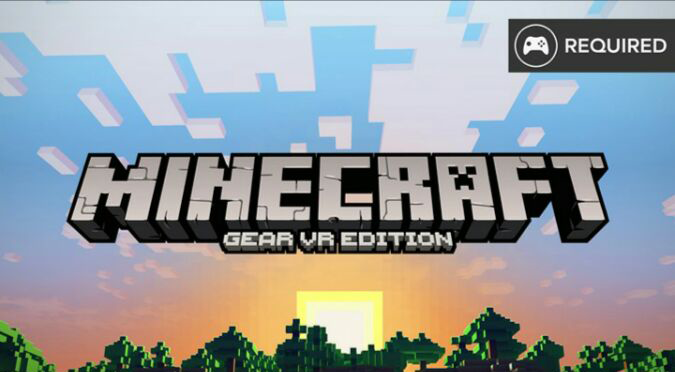 Everyone’s favourite block-busting, building adventure videogame, Minecraft, is now available for Samsung’s Gear VR, the mobile virtual reality (VR) platform. Minecraft: Gear VR Edition is set to become as popular as the many other versions already available for platforms such as Xbox One, Xbox 360, PlayStation 4, PlayStation 3, smartphones and, of course, PC. With that in mind, VRFocus has created a one-stop Minecraft: Gear VR Edition to present you with everything you need to know to get started creating your own unique worlds.

The download for Minecraft: Gear VR Edition weighs in at 108.85MB, and is likely to benefit from further updates that demand more capacity on your device further down the line.

The control input for Minecraft: Gear VR Edition requires an external controller and does not utilise the Gear VR’s built-in touchpad outside of view-switching (see ‘VR Modes’ below). VRFocus recommends the SteelSeries Stratus XL, but you can find out more details about the supported controllers here: The Best Gamepads for Gear VR.

Two control schemes are available: VR Controls (recommended) or the Classic Control. You can toggle individual features in the Options Menu, which can be accessed through the Pause screen by pressing the Menu button (gamepad) or Back (Gear VR).

Minecraft: Gear VR Edition supports all the features of Minecraft: Pocket Edition, including Creative and Survival modes, skins, and multiplayer. Both co-operative and competitive modes are available.

At the time of writing, the version number of Minecraft: Gear VR Edition is listed as 0.14.2, suggesting that many more updates are planned for this version before reaching the 1.0 considered standard by the software development community. 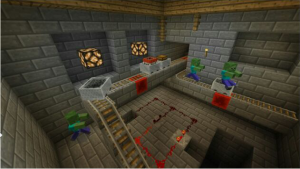 In Minecraft: Gear VR Edition, you can choose between default ‘theater view’ or the more intense Immersive Mode that lets you stand beside your creations. A number of different options are available for both viewpoints.

Upon beginning Minecraft: Gear VR Edition the player is placed in a static environment dubbed the ‘Living Room’. The player is able to look around their virtual room; however the gameplay is fixed on the virtual screen in front of them. Minecraft: Gear VR Edition can be played entirely in this mode or optional switched to Immersive Mode by tapping the Gear VR’s built-in touchpad.

Upon switching to Immersive Mode the player’s viewpoint will be switched to a first-person view, with the world rendered around them in a similar fashion to the default Minecraft experience on PC and consoles. This viewpoint is only recommended for experienced VR gamers.

The player’s gameplay and interaction within Minecraft: Gear VR Edition is controlled through a dedicated set of options located in the ‘VR Options’ menu. This menu can be access the Menu button (gamepad) or Back button (Gear VR). Full details of the options available in this menu are listed below.

[ON] VR Controls. All VR Options default to ON (except 3D Rendering on Gear VR) if these controls are selected.

This control function is altered when playing in Immersive Mode. It affects the turn speed of both Classic Mode (Sensitivity) and VR Turning controls.

This control function is altered when playing in Immersive Mode. It turns this behaviour on and off in VR, but doesn’t affect the Classic Mode Auto-Jump.

Upon loading Minecraft: Gear VR Edition the player is shown a UI screen where they have to pick the VR control selection.

[ON] The VR control selection screen will be shown at every boot up of Minecraft: Gear VR Edition.

[OFF] Turning off this option stops displaying the selection screen and the last selected control option is saved.

[ON] Turing is done in segments (default for VR Controls), commonly known as ‘comfort mode’.

[OFF] Classic Controls turning is turned on.  Note that VR Turn by Time setting is ignored.

[ON] VR Turn has the same number of turns per second, but the angles are different based on how far the Right Stick is pressed.

[OFF] VR Turn occurs with a constant angle.

[ON] A distinctive sound plays every time the player turns.

[OFF] No sound plays when turning.

[ON] The direction of motion of the character follows the player’s POV (gaze direction).

[OFF] If the character is moving, direction of motion is independent of POV. The character turns in relation to POV only if they are stationary.

[ON] This option turns on stereoscopic rendering when in Immersive Mode and slightly lowers the draw distance to try to maintain a steady frame rate.

[OFF] The world will render as monoscopic and the frame rate is higher, since  only one frame is rendered to both eyes.

[ON] The Jump is a two-stage linear jump, which removes the variable velocity and acceleration/deceleration from the jump. It also jumps the same height as a block instead of slightly higher.

[OFF] The videogame uses the Classic Controls jumping.

[ON] HUD is allowed to “float” for comfort.

[OFF] HUD is fixed in position to player’s POV.

[ON] The player velocity is constant with all acceleration/deceleration disabled.

[OFF] The velocity is standardised by the classic Minecraft: Pocket Edition ratios.

[ON] Causes the cursor to remain locked on the currently mined block until the block is destroyed. If the player POV moves to another block, a second cursor (a small, hovering white dot) appears to guide the player and highlight which block will be targeted next.

[OFF] The cursor moves freely as the player shifts their POV while mining. It is possible to interrupt mining if the player’s gaze shifts off the current block.

This adjusts the brightness of the game in both VR Modes (Immersive and Living Room).

This adjusts the Render Distance of Minecraft: Gear VR Edition in both VR Modes (Immersive and Living Room). Setting this too high may reduce frame rate and cause discomfort.

This option is not supported on Note 4 and is therefore hidden.

[ON] Anti-aliasing of block textures is enabled for improved visual quality. Frame rate will be reduced.

[OFF] Anti-aliasing of block textures is disabled.