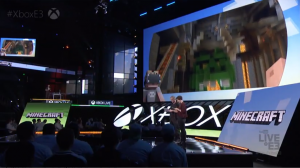 At Microsoft’s press conference kicking off the Electronic Entertainment Expo (E3) today in Los Angeles, Mojang AB announced ‘The Friendly Update’, a new addition to the ‘games as a service’ principle behind Minecraft’s development that would allow for cross-platform gameplay. It has since confirmed that this new update will be made available for the Gear VR release of Minecraft, known as Minecraft Gear VR Edition.

Having launched earlier this year, Minecraft Gear VR Edition has become a hugely popular addition to the Samsung Gear VR’s software catalogue. It was recently revealed that this version of the videogame would received an update incorporating Xbox Live Achievements, hinting at bigger cross-platform opportunities for this newest edition of the franchise. Today, those opportunities are being realised with The Friendly Update.

At it’s core, The Friendly Update allows players of all versions of Minecraft to share and collaborate, whether it be the worlds they’ve built or the stories they wish to tell. The fact that the Gear VR version of Minecraft has not been excluded from the update reinforces Microsoft’s commitment to the virtual reality (VR) edition. Moreover, the appearance of Oculus VR’s Chief Technology Officer, John Carmack, on stage at the event hammered the message home.

“I’ve said that Minecraft was my grail for VR, and this was the most important gaming application that I could be involved with,” stated Carmack at Microsoft’s press conference. “The ability to spin around, take in everything, and have the freedom to explore an endless world is what I thought the core of VR was intended to be.”

The Friendly Update is expected to be available for all platforms this week, though no specific timeframe was given for international rollouts and server propagation. Additionally, there was no mention of the forthcoming Oculus Rift version of Minecraft. VRFocus will endeavour to find out more details about the VR editions of Minecraft at E3 this week, so stay tuned for more to come. In the meantime have a look at our comprehensive guide to everything you need to know about Minecraft: Gear VR Edition.