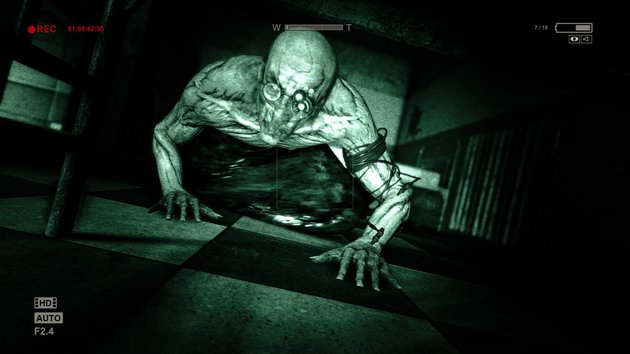 It’s Halloween week and, as ever, the videogame industry is getting in the spirit of things by reminiscing on the best horror titles and more. One of the better parts of this year’s celebration was this week’s announcement of Outlast II, the sequel to Canadian indie developer Red Barrels Studio’s hit survival horror title. In truth, it was somewhat surprising to see an indie horror title announced in 2015 with no mention of support for virtual reality (VR) head-mounted displays (HMDs). No doubt the question of possible integration will be fired in the studio’s direction soon enough but, until then, let’s think about what a VR Outlast could be like.

For those that don’t know, the original Outlast was a first-person experience in which players were cast as an investigative reporter exploring a mental asylum. With inmates on the loose, players are often tasked with hiding in the shadows and waiting for the ideal time to move, risking getting caught. It was an enjoyable, if fairly unremarkable experience, though it did make one or two of its own interesting twists.

The first of these was the ability to record events with a camcorder, which can double as a night vision device. In VR, controlling this camera with a HMD on would provide a deeper sense of really shooting what you see and handling of real camera as you use head-tracking to gaze around areas. Perhaps this camcorder could even appear as a physical object within the environment, with players having to use positional tracking to lean into the eyepiece to grab quick glimpses of an area before daring to move through it.

Stealth is a tactic that many horror titles have favoured over the past few years, but Outlast‘s brand of hide-and-seek was especially thrilling. Bringing these environments to life in VR would make it all the more so, allowing players to track enemy footsteps as they plod around the bed you lie under, or push your face up against the grating in a locker to get a better view of the outside world. New mechanics could be implemented too; imagine having to physically duck behind a desk to avoid being seen, daring yourself to take quick looks over the top to check if the coast it clear. Or perhaps you could be packed inside a locker and tasked with keeping perfectly still so as not to make any noise. There’s plenty of potential here.

Elsewhere, Outlast just has the makings of a really good horror VR experience. Imagine combining its haunting corridors and pitch black basements with something like the HTC Vive’s Room-Scale tracking and Cloudhead Games’ Blink locomotion system. For the slower parts of the experience this would be perfectly suited, although for the more action-driven segments it’s perhaps not quite applicable.

Either way, we can only hope that VR support is something that Red Barrel Studios has up its sleeve for the return of this popular horror franchise.

The post Make it a (Virtual) Reality: Outlast II appeared first on VRFocus.