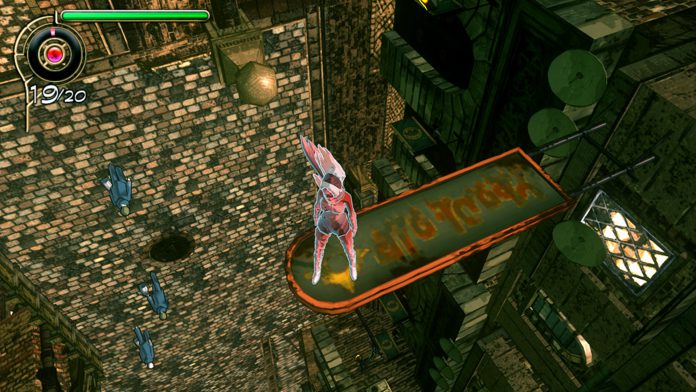 You’re soaring through the air, piercing the sky above the floating city of Hekseville. Its inhabitants gaze up in wonder as you bring yourself to a halt, hovering just above the tallest building, the city stretching out from all angles. Suddenly there’s a scream, and monsters start to pull themselves through a portal that’s appeared on the ground. They pour out, scattering onto walls and market stools, their glowing orbs inviting you to throw yourself down and smash into them. So that’s exactly what you do.

When it first released back in 2012, Gravity Rush was one of the few examples of a title that made great use of the PlayStation Vita’s wide range of features. In fact, save for Media Molecule’s sublime Tearaway, it was probably the best example full stop. This week Gravity Rush is returning on PlayStation 4 as a remastered package ahead of the launch of a full sequel later in the year. It’s encouraging to see a series many assumed to be dead revived on a new platform, but we can’t help but think that the series should have also made the transition to VR.

Gravity Rush casts you as Kat, a young superhero or sorts with the ability to manipulate the gravity field around her. This allows her to walk on just about any surface, soar through the air by placing gravity centres in different spots, and even throw herself into enemies to break defences and open up weak points. It’s an open world adventure that revels in comic book aesthetics and a breezy atmosphere that would be great to bring to life in VR.

It need not transition to a first-person experience, either. While titles like Neverout prove that gravity-bending VR can be fun and comfortable, Gravity Rush feels like it would be well served as one of VR’s growing list of third-person experiences, essentially casting the player as god as they peer down into the cel-shaded world. Watching Kat glide through the air as she hurtles towards a target would be a sight to behold in 3D, and helping her to judge the distance between targets and gaps could even give players to edge in platform sections and combat.

Time trials, obstacle courses and races could all become much more involving as you skim past buildings and make desperate leaps over walls. On Vita, much of the aiming was done by manipulating the system’s accelerometers to aim. Position tracking in VR could be the perfect substitute for this, allowing players to quickly angle the perfect shot and smash down into it.

It’s great that Gravity Rush has a future ahead of it. What would be even better is if VR was a part of that future. The series’ trademark superhero action feels like a great fit for PlayStation VR. Let’s hope it’s on the horizon for the future.

The post Make it a (Virtual) Reality: Gravity Rush appeared first on VRFocus.