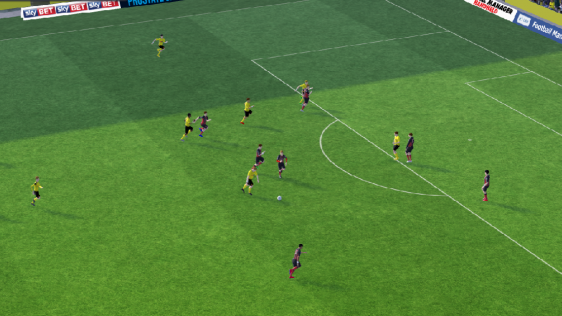 Living out sports fantasies is something that many virtual reality (VR) want to do. The tech may still be some way off from making us the best athletes in the world, but it’s impossible to deny the lure of putting on the Oculus Rift and scoring the perfect goal in a World Cup final or winning a Grand Slam tournament with a stunning return. But there’s another element of the sports genre that could be made much more powerful in VR; management simulation.

The latest entry in the Football Manager franchise has released this month in Football Manager 2016. Sega and Sports Interactive’s ever popular series allows players to take charge of their favourite team off the pitch rather than the star player on it. Players make key decisions and as they lead their team to victory. There’s two sides to what VR could deliver here, one concerning the information they’re given and the other looking at the matches themselves.

Admittedly Football Manager doesn’t seem like an immediately obvious fit for VR, but with a radical overhaul it could be one of the most unique experiences for the tech. Instead of having an overload of menus and lists to choose from, the title could be repurposed so that players actually live the life of a manager, making the same decisions and plans only in the same context that a real manager would. That might mean visiting training sessions to get a view on a player’s performance, or meeting with other clubs to discuss deals.

Of course, watching matches is a big part of Football Manager and there’s perhaps where VR could come in to play the most. Here you could really step into the shoes of your manager on the side-lines and look on with pride/dread as your game plans unfold. This is where the term ‘simulation’ might take on a more literal definition as you pace from side to side, evaluating each player’s performance, celebrate goals and vent your frustrations at defeats.

And once a match has wrapped up, imagine being able to get replays from any moment in VR as if you were there. You could get an accurate view of what works and what doesn’t. This would be a great way to help you adapt your plans and strategies.

Football Manager may not invite the most obvious opportunities for VR, but with a different take on the formula, it could fit quite comfortably. Don’t expect any sort of radical overhaul while the titles continue to perform as is, however.

The post Make it a (Virtual) Reality: Football Manager appeared first on VRFocus.