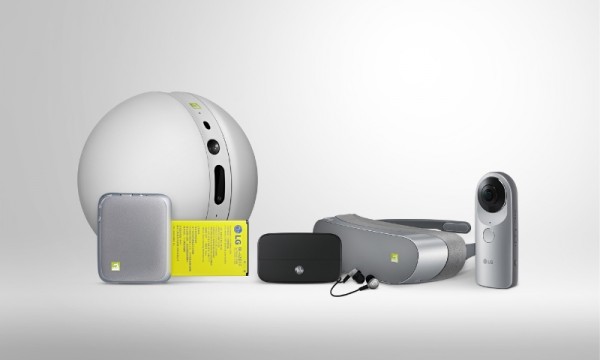 The LG G5 is set to receive the ‘G5 Friends’ companion devices, launching today. The LG 360 Cam captures full 360 images and video; the LG Cam Plus is a plug in camera grip that offers the feel and function of a real camera; and the LG 360 VR delivers a display experience of 360 degree virtual reality in a portable lightweight headset design.

The LG 360 Cam is a spherical camera that captures experiences from the user’s perspective in the centre of the action. With a quick connection of this device to the LG G5 it’s possible to take photos and 2K videos of entire surroundings thanks to the dual wide-angle 13MP lenses that capture 360 degrees of the action.

The LG 360 VR is LG’s latest effort to capitalise on virtual reality (VR), with the user offered the world of 360 degree videos and stereoscopic 3D videogames in a super light and compact format. It is controlled by either the LG G5 smartphone or onboard buttons. The headset allows users to view content as if watching a 130″ display from 2 meters away. Both the LG 360 VR and LG 360 Cam are now available at Bell.

The LG Cam Plus is not a VR device, but is the last piece in the ‘G5 Friends’ collection. A shutter button, zoom dial and a hand grip lets users take great one handed photos on the fly, and an embedded 1,200 mAh battery extends the life of the device. The LG Cam Plus is now available at Bell, Videotron and WIND Mobile.

No official pricing for these products has been announced, with LG suggesting that individual retailers will determine their own price-points. No release details for the ‘G5 Friends’ collection outside of North America have yet been announced, but VRFocus will of course keep you updated with all the latest details.