Today hand-tracking company Leap Motion has announced the winners of its second annual Leap Motion 3D Jam. This year’s competition featured over $75,000 in cash and prizes with close to 200 final submissions from nearly 2,000 developers registered from over 90 countries.

Under the AR/VR track the winners are as follows:

In first place was Lyra VR. Lyra is a virtual playground that lets you create music in 3D space. Chain chords, melodies, and instruments together in complex webs, then watch and listen to it unfold. The developer won $10,000 USD, Unity Suite, 2 OSVR HDKs and a NVIDIA GeForce GTX 980 Ti. 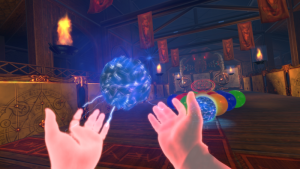 Third place went to RPS Island, where you must defeat a never-ending onslaught of enemies by signalling their weakness. The developer won $5,000 USD, Unity Pro, OSVR HDK and a NVIDIA GeForce GTX 980 Ti.

And in fifth place was HellVibe, where players need to solve a demonic puzzle box to set yourself free from an astral prison inspired by Hellraiser and Myst. The developer took home $1,000 USD, Unity Pro and a OSVR HDK.

There were also two community favourites in this track, PotelRVR, Pottery Maker and Virtual Real Meeting, both of which won $500 USD and a copy of Unity Pro.

There was also an Open Track with three winners:

First place went to Spiders of Mars, an endless shooter where you square off against an never-ending horde of robot spiders. The developer won $10,000 USD, Unity Suite and a NVIDIA GeForce GTX 980 Ti.

In second was Zombies Shall Not Pass! Putting players in the role of the undead, you must groan, thrash, and devour your way through the last survivors of the human race. The developer won $7,500 USD, Unity Pro and a NVIDIA GeForce GTX 980 Ti.

Last but not least was the community favourite, Universal Accessibility Vehicle (UAV), an experimental wheelchair interface that lets you navigate and control household appliances. The developers took away with them $500 USD and Unity Pro.

VRFocus will continue to cover any future Leap Motion 3D Jams as details are announced.