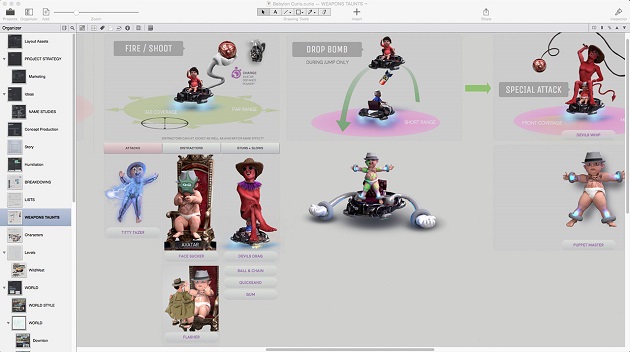 Back in November 2015 developer Kite & Lightning revealed the first details for virtual reality (VR) videogame Bebylon Battle Royale. Since that announcement the studio has been fairly quiet on the titles development, but a new blog posting this week has shone some more light on the studios plans. An image in the blog shows some new models which maybe featured in the videogame.

Kite & Lightning is a two-man team consisting of Cory Strassburger and Ikrima Elhassan, and the posting features Strassburger detailing the software being use to create Bebylon Battle Royale. He lists programs like Curio, Unreal Engine 4, Maya, Z-Brush and several others that go into his videogame building process.

To begin with he writes: “Let’s start with Curio, which is really an incubator where my brain dumps and evolves ideas. For Bebylon I use Curio to organize ideas on everything from character and level design to project and marketing strategies.” An example image (above) he uses shows the layout of different gameplay ideas, with the image showing a couple of character models not seen before. One takes the form of a small baby in a red top performing a jump attack, then moving onto a special attack called Devils Whip which features a large red demon in a cowboy hat.

The entire image is taken from a weapon taunt section in the build, which showcases actions such as Titty Taser, Face Sucker, Puppet Master, Flasher and others. Now as Strassburger previously said, these are all just ideas so there’s no guarantee everything seen here will be included in the final release, but it does give an indication of what to expect.

VRFocus will continue its coverage of Bebylon Battle Royale, reporting back on any further developments.