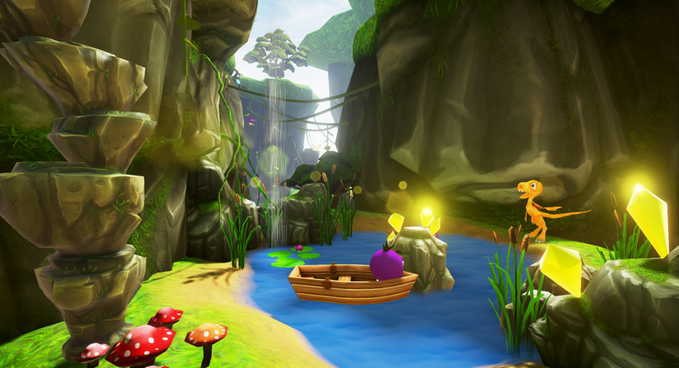 With virtual reality (VR) technology taking hold in a number of different industries outside of videogame entertainment, it’s been well documented that the medical uses of VR are becoming more prominent. From Medical Realities VRinOR app on Samsung Gear VR, allowing viewers to watch a surgery procedure to researchers using the technology to combat depression and phobias, the possibilities are just starting to be explored. Through a new Kickstarter crowd-funding campaign, Oniric Interactive is looking into the benefits that VR could have for reducing the pain and anxiety in children receiving medical treatments.

The project’s called Dreamland and its a VR videogame who’s focus is on being a distraction tool for these kids. As the description describes: ” Kids are not small adults, they perceive pain differently and the approach toward painful procedure is much different. Anxiety and anticipation greatly modulates pain perception and can often jeopardize a treatment if a child’s collaboration cannot be obtained.”

Dreamland is set in a fantasy world filled with friendly dragons, floating islands and purple berry enemies. Using the dragons for help and an apple cannon, players rid the islands of these little invaders.

Supporting the Oculus Rift head-mounted display (HMD), Dreamland’s controls have been designed to be simple to understand whilst easy to work with in various medical settings. Aiming is achieved through head movements, with a single button press to fire the apples. The experience has also been designed to ensure very little to no simulator sickness is caused.

Oniric Interactive’s funding goal is $7,000 CAD, with stretch goals adding further characters, levels and polish. Reward tiers begin at $1 rising up to $500. To try a copy of Dreamlands for yourself you’ll need to pledge $5 or more. The campaign has so far raised $330 towards its funding target with 24 days left to go.

As the project progresses VRFocus will continue with its coverage of Dreamlands, reporting back with any progress updates.