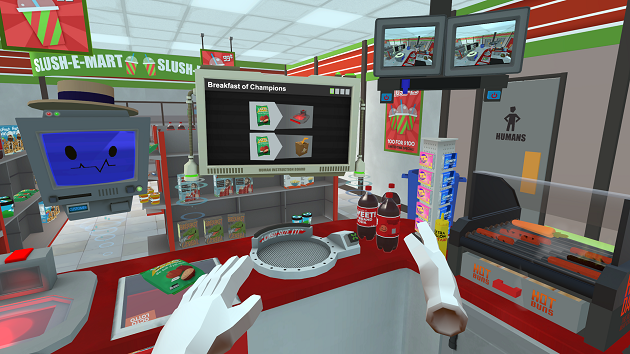 Owlchemy Labs’ virtual reality (VR) title Job Simulator which was originally announced for the HTC Vive head-mounted display (HMD), has since been confirmed to be heading to Oculus Touch and PlayStation VR. Since then it seems rumours have been circulating via Reddit that the title may drop 360-degree support for its environments on the HTC Vive. These rumours have now been debunked with the developer clarifying via a new post what is actually happening.

On the r/vive sub-reddit Owlchemy Labs have now said: “Some folks on Reddit were misinformed and had postulated that Job Simulator on the Vive might possibly drop 360-degree support for its gameplay/environments. This is untrue, so I figured I’d put up a post to explain. For setups where players can move around freely (room-scale on Vive), we will of course continue to develop 360-degree environments.”

“On front-facing camera setups or setups where lateral and forward/back clearance is fairly tight/constrained (PSVR / Oculus Touch / small Vive setups), we’re building 180-degree versions of each of our environments where all interactable items are contained within the forward half of the environment.”

Further on down the thread a user asks if the 180-degree version for Oculus Rift will be optional, with the studio responding: “Great question. I don’t currently see any huge obstacles preventing us from having some kind of optional “enable 360 support” flag on Oculus. We’ll see how this all plays out as we get closer to launch, but if it’s easily doable on our end, we’ll give it a go. We want people to have the best experience and there’s nothing worse than unknowingly turning around and reaching for something and having your hands pop out of existence. The loss of presence is pretty incredible.”

So it seems as if Owlchemy Labs are managing to cater for all eventualities with each of the headsets and their different technologies. Fans will have to wait until all the headsets are launched to really see if and how these options may detract/improve the overall experience.

VRFocus will continue to report on the latest news from Owlchemy Labs as further announcements are made.