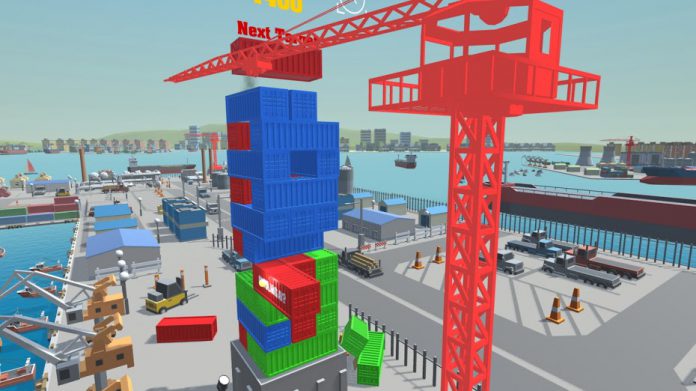 HandMade Game, the South Korean developer behind virtual reality (VR) title Rooms: The Unsolvable Puzzle has announced details of its next project. Called CRANGA!: Harbour Frenzy the videogame is a mix of classic block moving game Jenga with cranes and freight containers.

Created at the One-Day VR game jam at Pangyo, South Korea in December 2015, CRANGA!: Harbour Frenzy uses industrial crane to manipulate a yellow ball in order to push and remove blocks from a teetering tower. It differentiats from its Jenga inspiration by suggesting a container which players then have to remove from the tower. Just as the game its based on CRANGA!: Harbour Frenzy requires players to look around the tower to find the most appropriate block to remove so that the entire structure doesn’t collapse. The final version will include singleplayer and multiplayer modes where players can play and compete with others in various challenges.

“Inspired by a well-known board game, we reinvented it into a whole new level with VR,” said Jake Kim from HandMade Game. “The control scheme using the gamepad creates unique tension between controlling a crane and pushing the right container block. As the player’s skill level increases, the game introduces various items and types of containers like exploding or slippery ones, adding more depth and challenge to the gameplay. One wrong move will bring about epic destruction.”

The developer plans to release CRANGA!: Harbour Frenzy on all the major VR platforms including Oculus Rift, HTC Vive and Sony Interactive Entertainment’s (SIE’s) PlayStation VR head-mounted display (HMD). The official website lists a release date of October 2016 for all the headsets, although it hasn’t fully confirmed if the videogame will be a PlayStation VR launch title on 13th October.