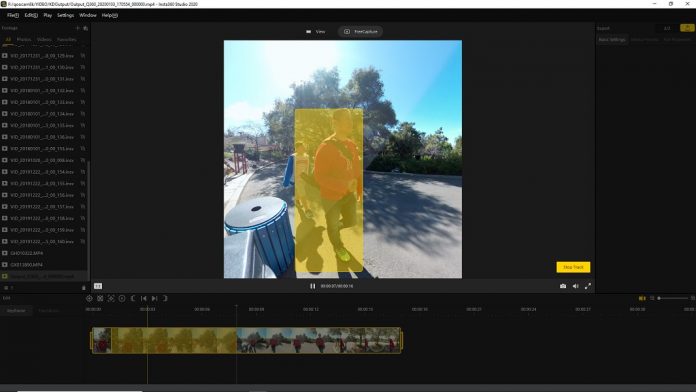 
You will be able to use advanced object tracking and speed ramp effects for any 360 camera from Insta360 and possibly other manufacturers as well with a coming update to Insta360 Studio 2020 v. 3.5, which will support Deep Track and Time Shift.  I’ve been beta testing it and these features work pretty well.  Here are the details.

Insta360 Studio is the desktop app for Insta360 consumer cameras such as the One R (reviewed here), One X (reviewed here), and Insta360 Go (reviewed here).  The coming update (version 3.5) will add features that the Insta360 community has long been waiting for: Time Shift speed ramp effect, which lets you transition from slow motion to fast forward and vice-versa in the same video.  In addition, Insta360 has also added Deep Track, an advanced object tracking algorithm that can track subjects even if they disappear briefly behind obstacles or turn around for example.

To use Time Shift, drag the playhead to the beginning of the slow motion or fast forward segment, then click on the lightning bolt icon above the timeline.  Then select the point on the timeline when the effect ends.   This feature can be used on both 360 and Freecapture (non-360 reframed video) mode.

To use Deep Track, switch to the FreeCapture tab on top.  Then click on the star icon above the timeline. Then use the left-drag mouse button to draw a rectangle around the subject.  Insta360 Studio will begin tracking that subject until the end of the clip or until it loses track of the subject.  You can also interrupt the tracking at any time by clicking on the yellow Stop Track button on the bottom right.

Remarkably, Insta360 Studio has enabled these features even for non-Insta360 cameras, at least in the beta version that I’m testing.  I’ve been able to import 360 videos from other cameras as long as they are in MP4 format (H.264 or H.265) and are equirectangular with a 2:1 ratio.   I’ve tried it with an H265 360 video from GoPro MAX and 8K video from Qoocam 8K and have been able to use Deep Track, Time Shift and other features.

I’ve asked Insta360 several times about this and so far they have not removed this cross-compatibility.  It appears they may really be allowing other cameras to use these features (for now).