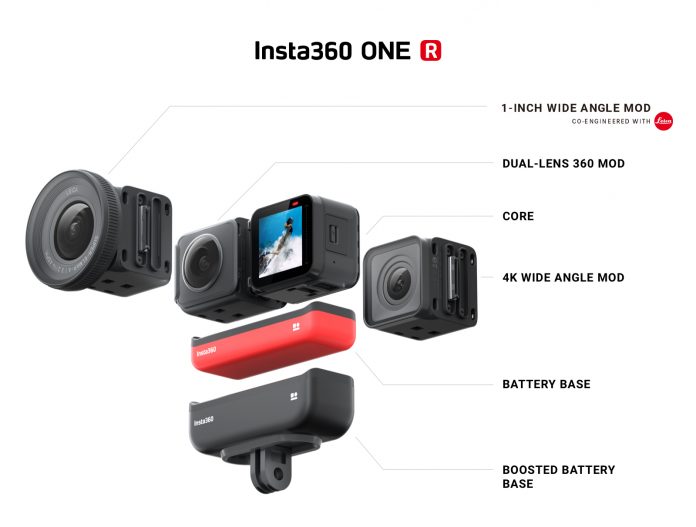 
Here are 30 features and disadvantages of the Insta360 One R, based on my hands-on use as a beta tester, and Frequently Asked Questions (FAQ) about the One R. Updated: January 10, 2020. Originally posted: January 7, 2020.

Here is the launch video:

Here are my first impressions and its key features:

Insta360 One R is a modular 360 camera that can be converted into other cameras such as a 4K action camera, a 1-inch sensor camera, or a 360 drone camera. With the One R, a user can select the best camera for the job. For example, the 360 module can be used for “impossible” third-person view shots, the 4K wide angle module for more detail and for slow motion (up to 1080p at 200 fps), or the 1-inch wide angle mod for the best image quality and low light performance.

I’ve been shooting with the One R and have been quite impressed. The touchscreen makes the One R much easier to use than the One X. I’m able to change almost all the settings that are in the smartphone app.

As for image quality, I found the video quality to be slightly better than that of the One X. I’ve been most impressed with its photo quality. I was surprised that the One R can do a 9-shot HDR in Raw+JPEG with no ghosting. I’ve also been able to use the Night Shot (median stacking) feature to capture photos in low light conditions, with little noise. Surprisingly, the photos have shown no ghosting even though it combines nine photos.

As for the modular aspect, I found that I seldom had the time to reconfigure the One R in the field. I think it would be better if the One R had a non-360 mode like the GoPro MAX, or had a core that could support both a 360 module and the non-360 4K module so that I could quickly switch between the two shooting modes. I will be testing the 1-inch module soon, which I expect will be more useful due to its significantly higher image quality.

Insta360 One R price and availability

The Insta360 One R Twin Edition (with a 360 module and the 4K wide angle module) is now available for $479 (use code: CES2020 during checkout to get free selfie stick for a limited time). Orders will begin shipping shortly.

Here is an official sample from Insta360:

I will post sample photos and videos from the One R when the embargo lifts next week on January 14.

1.3. Does the date and time still reset?
No (unless the battery is drained for a long time).

1.5.  I looked in the camera playback or on my phone and the video has poor stitching and low resolution.
That’s because you’re looking at only a low-resolution preview. To see the actual image quality, you need to download the video to your app or to the desktop.  You’ll see improved stitching, resolution, and stabilization.

2.3.  Why does the video quality on my 4K phone / camera look better than the 5.7K video on the 360 module?
Because the 5.7K resolution of a 360 video is spread out over 360 degrees.  Your phone’s 4K video is spread out over around 70 degrees. So your phone or non-360 camera will have more pixels per degree.  For a better comparison, use the 4K module, or the 1-inch module.

3.1.  What is the 4K module?
It is a partial fisheye lens with 16.4mm equivalent focal length paired with a 1/2.3-inch sensor, similar to the field of view of a GoPro Hero8.

4.1 What is the 1-inch module?
It is a rectilinear ultrawide lens (equivalent to 14.4mm focal length) co-designed with Leica, and paired with a 1-inch sensor with 5.3K video.

5.1. What is the benefit of the Aerial Edition?
You can mount the One R on a Mavic Pro to capture a stabilized aerial 360 video where the Mavic Pro appears invisible in the video.  The 360 video can be reframed to non-360 using Insta360 Studio to point to any direction, with adjustable field of view.

5.2. What is the weight of the Aerial Edition rig (including cameras)?
300 grams, according to Insta360.

5.3. Which drones are compatible?
Mavic Pro or Mavic Pro 2.  In the future, they are planning an FPV drone version.  No mention of Mavic Air or Mavic Mini or DJI Spark.

5.4. How many drone editions are there?
There are 2: Aerial edition, and the Aerial add-on.  Each one has a version for Mavic Pro 1 and Mavic 2 Pro.

Aerial Add-On is for users who already have a core from another edition. It includes:
– split-lens 360 module
– vertical battery
– drone mount

5.5. Can the aerial edition be used for 360?
Yes for the Aerial Edition.  For Aerial Add-on, yes if you have the core, standard battery, and camera bracket.

6.4. How long does it take to charge?
Around 65 minutes via USB Type C. Or 30 minutes with the Fast Charger.

6.5. Can you buy extra batteries?
Yes, $29 each. They are more expensive than typical batteries because they have more customized parts and cost more to manufacture than normal batteries. Alternatively, you can get the boosted battery (see 6.6 below).

6.6.  What is the boosted battery?
It has twice the capacity of the normal battery.  It also has a foldable gopro mount, and does not need the frame.  When using the boosted battery, the One R is splash resistant but not waterproof.

6.7.  How do you charge the battery?
You can charge via a USB Type C connected to the Core or you can use the optional fast dual charger.

7.1. Can you use microphones with the One R?
Yes.  There are two options: there is an Insta360 USB Type C to 3.5mm mic adapter, or you can use Airpods or other Bluetooth headset as a wireless microphone.

7.4. How many microphones does the One R have? Where are the microphones?
There are two: on top, near the power switch, and on the side, near the USB port cover.

8.1. Is the One R waterproof?
Yes up to 16.4 feet (5 meters) if you use assemble the components and the camera bracket. Make sure there is no dust or sand in the connectors or between the modules, and the USB port is sealed.

8.2. Will the Lens Guard neutralize refraction underwater?
They said it will. Not sure from the design.

8.4. Why is the 360 Dive Case expensive?
It includes the vertical battery (same battery as the Aerial Edition).

9.1.  Will the desktop app have all the editing capabilities of the phone app?
As of launch, no.

9.2.  What’s the fastest way to transfer: cable or micro SD card or wireless?
From my experience, via USB 3.0 Micro SD card reader. YMMV.

10.1. Can I use a different brand selfie stick?
Any selfie stick or monopod with ¼-20 tripod connector works, and will be invisible as long as it is within the stitch line.

10.5. What are the remote control options for One R?
– Your smartphone (Android or iOS)
– The Insta360 GPS Bluetooth remote.  Needs firmware update.
– Apple Watch using the One R app for Watch OS.  Note: it can only shoot. It cannot view photos or videos.

10.6. Is the One R camera bracket compatible with accessories that use a GoPro mount?
Generally yes.

11.1. How to reset the camera?
Remove the battery or hold down the power button for 30 seconds.  If problems persist, switch modules, turn on, turn off, switch back, turn on again.