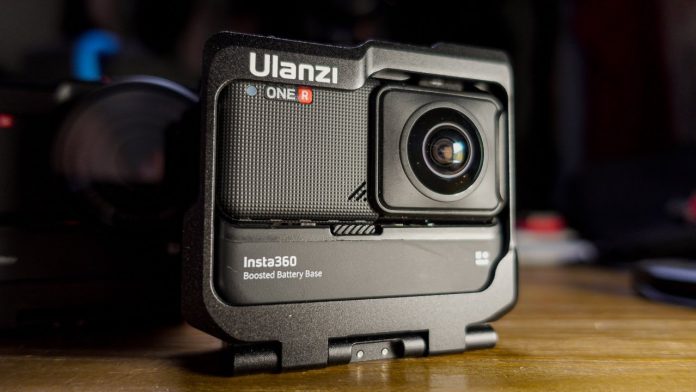 First, here’s a video about it from Yuqing Guo, a 360 photographer who is one of the designers of the cage:

Issues with the Boosted Battery

Insta360 One R (reviewed here) is a modular 360 camera that can convert to other cameras, using modules such as a 4K action cam or 1-inch camera.  One of its accessories is the Boosted Battery Base, which more than doubles the recording time, and in addition, makes it easier to switch modules.

The Ulanzi cage was created to address these issues.

1. Water Resistance: The cage holds the modules of the Insta360 One R tightly, which enables the One R and Boosted Battery to be water resistant when used with the cage.

4. Protect your One R: The Ulanzi cage is metal and can protect your One R from some bumps although it offers no additional protection for the lens or touch screen.  Nonetheless, it ensures that your modules will not split apart even with a hard impact.

6.  Reduces overheating (not yet tested): The Ulanzi cage can act as a heat sink to draw heat away from the core, lens and the Boosted Battery.   Yuqing is testing this and I’ll update this post with the recording time with and without the cage.

3. Adds weight.  The cage weighs about 93 grams.  It is not heavy but does add a little weight to the One R, which could be a factor if you use the One R on a drone.

The post Insta360 One R Boosted Battery cage has 3-in-1 tripod mount and water resistance (Ulanzi One R Plus Metal Cage) appeared first on 360 Rumors.