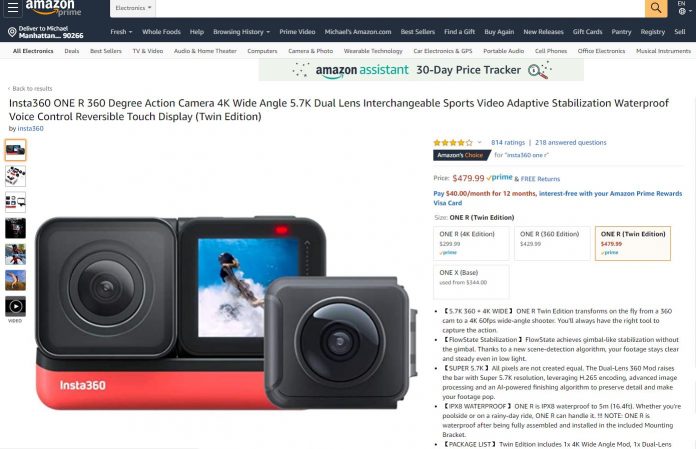 
Insta360 One R (reviewed here) is now in stock at Amazon or B&H Photo.  The One R has been available directly from Insta360 since February but is now finally available at Amazon and B&H Photo as well.  For customers in the US, ordering from Amazon or B&H is probably faster than ordering from Insta360 directly, and it’s easier to return the camera if you have any issues.  Here are the cameras and accessories available right now:

One R Twin Edition (includes 360 mod and 4K wide mod): $479 (Amazon or B&H Photo).  If you buy from B&H using their payboo credit card, you can get a rebate of the sales tax (like having no sales tax).  Meanwhile, Amazon’s credit card gives a 5% rebate on Amazon purchases.

Microphone adapter (preorder): $10.  This is the best option for clear audio.

This is the camera bag I use for the One R.  It can carry the One R plus two additional modules.

Other editions, modules, and accessories such as the 1-inch module, the aerial edition, the mic adapter, and the fast charger are available only so far from Insta360 directly.

The post Insta360 One R and accessories now in stock on Amazon and B&H Photo appeared first on 360 Rumors.