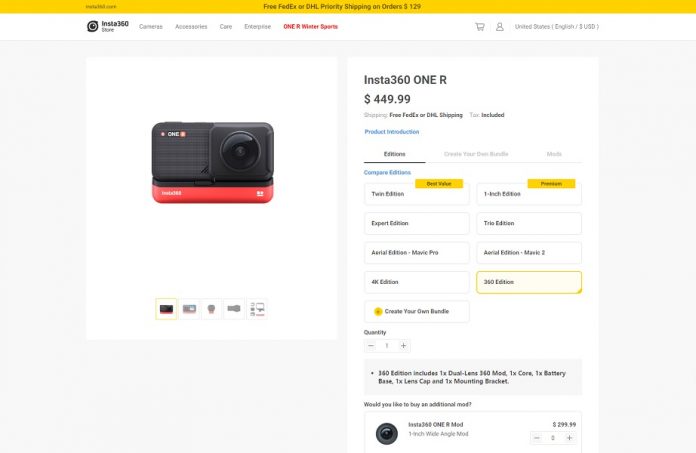 I think the 4K module is easily worth the $30 difference between the two kits.  The 4K module can capture more detail and smoother slow motion.  It is also more rugged than the 360 edition.  It is also great for capturing videos when you don’t need to change your view.

The second question is, if you’re getting the One R 360 module only, then should you just get the Insta360 One X (reviewed here) instead?  In my tests, I found that the One X has as much if not slightly more detail than the One R.  The One X also has better stitching because it has a smaller distance between its lenses.

On the other hand, the One R has a touchscreen that makes it much easier to change your settings and to review your photos and videos.  You can even set the shutter speed and ISO for manual exposure on the camera menu.  With the One R, I almost never shoot with my phone anymore.

The One R is also waterproof without a case.  It also has some features that are not available on the One X such as the Night mode, which combines both stacking and HDR.  It takes a burst of nine Raw DNG photos, eight of which are used for image stacking to reduce noise, while the ninth photo is underexposed by 4EV to capture highlights.  One R can also shoot a 9-shot HDR with Raw DNG.   One R also has a starlapse mode, which can take time lapse photos and convert them into animated star trails.  Finally, the One R is upgradeable whereas the One X is not.

In summary, I think the Insta360 One R Twin Edition is a better deal than the 360 Edition, but even without the 4K module, I would prefer the Insta360 One R over the One X in most situations, unless you need to shoot in tight spaces regularly (in which case, the One X’s better stitching could outweigh the One R’s other advantages).