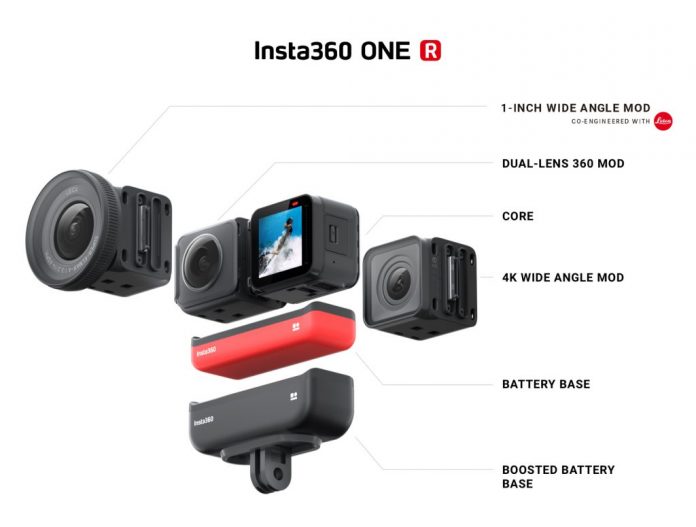 
Here are 30 features and disadvantages of the Insta360 One R, based on my hands-on use as a beta tester.

Here is the launch video:

Here are my first impressions and its key features:

Insta360 One R is a modular 360 camera that can be converted into other cameras such as a 4K action camera, a 1-inch sensor camera, or a 360 drone camera. With the One R, a user can select the best camera for the job. For example, the 360 module can be used for “impossible” third-person view shots, the 4K wide angle module for more detail and for slow motion (up to 1080p at 200 fps), or the 1-inch wide angle mod for the best image quality and low light performance.

I’ve been shooting with the One R and have been quite impressed. The touchscreen makes the One R much easier to use than the One X. I’m able to change almost all the settings that are in the smartphone app.

As for image quality, I found the video quality to be slightly better than that of the One X. I’ve been most impressed with its photo quality. I was surprised that the One R can do a 9-shot HDR in Raw+JPEG with no ghosting. I’ve also been able to use the Night Shot (median stacking) feature to capture photos in low light conditions, with little noise. Surprisingly, the photos have shown no ghosting even though it combines nine photos.

As for the modular aspect, I found that I seldom had the time to reconfigure the One R in the field. I think it would be better if the One R had a non-360 mode like the GoPro MAX, or had a core that could support both a 360 module and the non-360 4K module so that I could quickly switch between the two shooting modes. I will be testing the 1-inch module soon, which I expect will be more useful due to its significantly higher image quality.

Insta360 One R price and availability

The Insta360 One R Twin Edition (with a 360 module and the 4K wide angle module) is now available for $429 and will be shipping shortly.

Here is an official sample from Insta360:

I will post sample photos and videos from the One R when the embargo lifts next week on January 14.

The post Insta360 One R: 30 Features and Disadvantages appeared first on 360 Rumors.